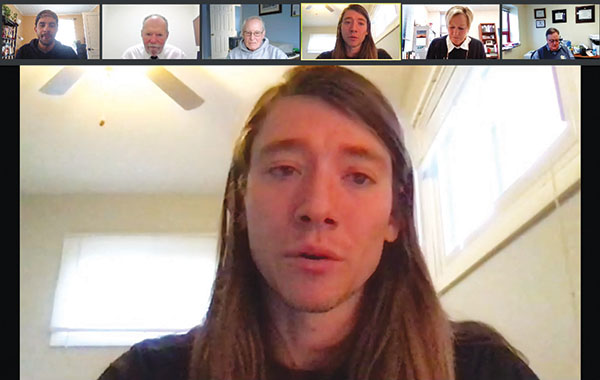 DOWAGIAC — Southwestern Michigan College athletics are back and the school’s cross country teams were the hot topic during the Dowagiac Rotary Club’s weekly meeting Thursday via Zoom.

Newly minted cross country coach Juris Silenieks joined the club’s meeting to talk about his background and his plan to turn the Roadrunners into a cross country power house once again.

A native of Grand Rapids, Silenieks attended Syracuse University and was a member of the Orangmen’s 2015 NCAA cross country national championship team. He also was an Olympic trials qualifier for the 2020 Tokyo Games, which were postponed due to COVID-19.

His coaching career began at Robert Morris University, a Division I school near Pittsburgh, Pennsylvania, where he was the track and field distance coach. He was able to take the Colonial’s from a fifth-place team in the Northeast Conference to a third-place squad in just two seasons.

“I kind of always wanted to be a coach,” Silenieks said. “I’m super passionate about distance running. My fiancé and I moved to Michigan for other job opportunities and we’ve super grateful to have Dr. Joe and the rest of the SMC college behind me and staff are so supportive of me coming on.”

“That will be a great recruiting tool,” he said. “Kids want to be able to race in those meets and everything so we’re super excited about that.”

Silenieks understands the expectations levied upon him. In cross country, SMC dominated the Michigan Community College Athletics Association, winning the championship 23 out of 25 years, including a stretch of 11 consecutive seasons. The Roadrunners also won five NJCAA titles and three national marathon championships.

“The running trails here are incredible,” he said. “I think, quite honestly, the running itself around Dowagiac is better than any school I’ve been to or that I’ve trained at or coached at. It’s better than what Michigan State has. I think there’s a lot of room to grow. All of that athletic facilities are great, the dorm rooms and all of those things so I think there’s a real opportunity to build a really successful big team like they had 25 years ago and once we get some numbers here.”

While jumping into recruiting has been a challenge, Silenieks has been able to connect with student athletes and set up official visits, unlike the National Collegiate Athletics Association, NJCAA teams are able to schedule official recruiting visits during the pandemic.

“That actually gives us a leg up on the competition,” he said. “We’re a year behind in terms of recruiting, so we’re reaching out to as many kids as possible. I think I’ve sent out almost a thousand emails and another 200 to high school coaches.”

Silenieks said he would like to have a roster of 10 boys and 10 girls for next year’s team, but would love to have more.

“We want to have one-on-one interactions and really develop their athletic ability but also build relationships,” he said. “We want to develop good athletes and good people. When you get 40 kids of each gender, we can’t build that kind of relationship with those kids. I think 10 to 15 is manageable. I wouldn’t want to go over 20 for each gender unless I had a paid an assistant coach.”

The SMC cross country program was the pride of the Dowagiac community for decades. Silenieks aims to mold his program into one the community can be proud of for years to come.

“I would love to engage the small businesses and everything else and get them involved with the team’s community service hours,” he said. “Every kid that I talk to is thinking about their career already and has this neat, cut resume looking for volunteering opportunities. When we have that team involved, I would love to work with Rotary members to talk about ways the team can be involved in the community with that. We will definitely be looking for support for the cross country meets we have in the fall.”