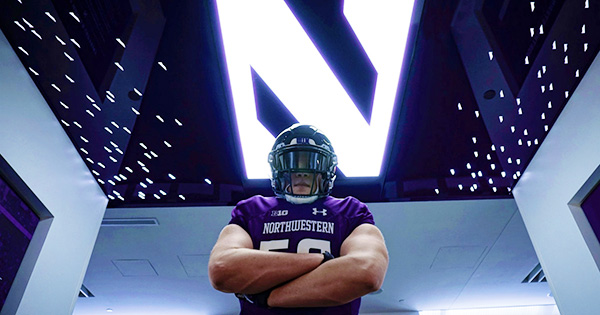 EDWARDSBURG — For former Edwardsburg standout Josh Priebe, just getting to play his freshman season of college football has been special.

Even more special is that his Northwestern Wildcats will play for the Big Ten Championship at Lucas Oil Field today against the Ohio State Buckeyes.

The Wildcats, for which Priebe is a back-up guard as a freshman, rolled into the championship game with a 28-10 win over rival Illinois in the Land of Lincoln Trophy game last Saturday. Northwestern clinched its second Big Ten West Division title in the past three seasons with the victory. It was also the Wildcats’ sixth consecutive win over the Illini.

It was a bit of a roller coaster ride for Priebe and the Wildcats to even get to their season opener against Maryland, a 43-3 win, back on Oct. 24. Northwestern went 6-1 in the regular season, which were all Big Ten Conference games. Its only loss was a 29-20 setback against Michigan State.

The Wildcats were fortunate to have just one of their games canceled due to COVID-19.

“It was a whirlwind of emotions going back and forth between the season being canceled and not canceled. Once we found out [it was going to be played] we had like three or four weeks of camp,” Priebe said. “Everyone was really excited and pumped up for that first Maryland game, and we kind of took all that excitement into the rest of the games.”

Priebe played in all the regular-season games for the Wildcats. At times, he would know he was definitely going to be on the field because of certain situations, while at other times, he had to be ready to go when the coaches called upon him.

“A couple of times throughout the season, because we had a couple of injuries, we have a package where I am a ‘jumbo’ tight end, so I go in different blocking packages like goal line, or certain times like that. The times I was playing ‘jumbo’ tight end, I went into the game knowing that I was going to play and knew what situations I would be going in. The times I wasn’t doing that, then it was like if something happens, I go in, or if we have a pretty good lead, I go in and play some guard.”

Priebe said that his expectation of playing college football was matched by the experience, with one exception.

“It was a little weird not having fans,” he said. “I am sure that, obviously, that makes game day a little different. Game days are definitely the best day of the week. Playing Big Ten football is a lot of fun.”

The first time a coach called his name and told him to get into the game, it was not a lot different from the first time it happened in high school.

“It is comparable to the first time you get into a varsity game as a freshman,” he said. “You are just kind of wide-eyed. You do not expect it to happen, but when it does, you just go out there and take that energy and excitement out on the field and you play as hard as you can.”

Speaking of coaches, Priebe said that playing for Northwestern Head Coach Pat Fitzgerald has been a great experience.

“He is an awesome guy,” he said. “Through recruiting a couple of years ago, he is the same guy as he was then. He wasn’t putting on some type of show to get guys to commit. He is the same guy. Just from what I have seen, compared to other coaches, he is such a personable guy who really cares about the well-being of his players. That has really shown through the year I have been here.”

The Big Ten Championship game kicks off at noon and can be seen on Fox.

DOWAGIAC — Southwestern Michigan College athletics are back and the school’s cross country teams were the hot topic during the... read more