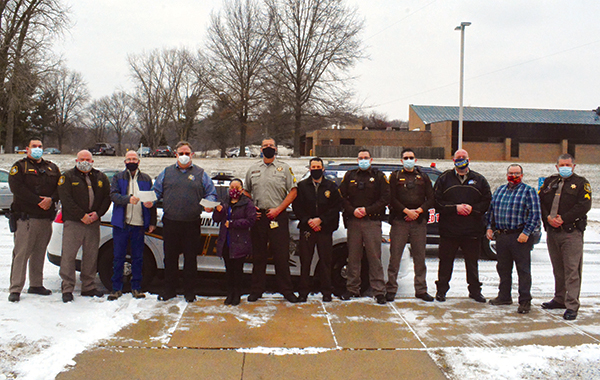 CASS COUNTY — After almost two months of rocking stubble, whiskers and all assortments of facial hair to raise money for charity, the clean-shaven members of the Cass County Sheriff’s Office made sure their No Shave November efforts did not go to waste.

“We were looking to find a way to raise more money because we think the need is there,” said Cass County Sheriff Richard Behnke. “A lot of contributions are down. Fundraisers are down. This was a great way to give back to organizations that do so much for us.”

To participate in the event, sheriff’s department workers paid $50 for the month of November and $25 for December to be able to grow facial hair, according to Behnke. Typically, police officers are required to be clean shaven, so the fundraiser offers a change of face, so to speak, for those participating. In addition to No Shave November, the office also started a Casual Fridays fundraiser, where office workers paid $10 per month to be able to wear business casual attire on Fridays for the months of November and December.

According to Behnke, the two fundraisers, in addition to sizable donations from community members, allowed the sheriff’s office to raise $5,500 this year, up from the $3,000 raised last year.

“This is our fourth year of doing a No Shave November fundraiser,” Behnke said. “It was initially started to raise cancer awareness and research, but we wanted to make it more of a local community thing and give back to our local communities. This year, we decided to open it up a little bit and ask the community to donate and raise money and the response has been great. We’re still expecting some more money to come in and we’ll disperse that as it comes.”

The donation was much appreciated by DASAS executive director Krista DeBoer.

The organization serves Cass, St. Joseph and Van Buren counties with the objective of leading efforts to end domestic violence and sexual assault in southwest Michigan. DASAS offers a number of services to domestic and sexual abuse survivors including a 24-hour crisis hotline, counseling, support groups, legal advocacy and access to housing and financial assistance, in addition to many other services.

The money raised will go toward continuing services and support to survivors of domestic and sexual violence.

“This donation is going to mean so much to us,” DeBoer said. “Because of the pandemic, things have been a little different this year, so every little bit helps. It’s so amazing to have our community support us and this donation allows us to continue to help survivors to gain some hope and healing.”

Feed the Hungry raises money that goes towards buying food items to help feed families in the Cass County area. Monetary donations are turned over to ACTION Ministries, a collaboration of six area churches that administers to individuals and families in the Dowagiac area. For every $1 Feed the Hungry raises, ACTION is able to purchase $6 worth of food, according to campaign spokesperson Jim Allen. This year, the program has already met its goal of $20,000 raised, and with Thursday’s donation, has raised more than $35,000.

“With the money we’ve raised, we’ll be able to purchase more than $222,000 worth of food,” Allen said. “That’s just amazing. Nationally, food pantries can’t keep up with demand and we stock ours twice a month. It’s all because of stuff like this. I think it’s really big for the community to see just how much our police do because the community has no idea what these guys go through on a daily basis. They’d be shocked. This donation means so much to us.”