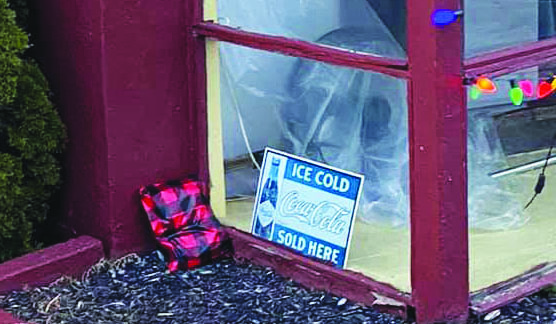 SISTER LAKES — Santa Claus and his helpers have punched in early to help make sure Sister Lakes families have a merry Christmas.

Sister Lakes Secret Santa has been busy dropping off wrapped gifts and meals to mystery spots throughout the Sister Lakes area so families in need can provide for their loved ones this holiday season.

Before creating their own Facebook page, Sister Lakes Secret Santa volunteers had been posting images of the gifts, taken at locations throughout Sister Lakes, on the Sister Lakes, Michigan Facebook page so people could find them. The posts’ captions include information about the gift in the caption.

“She was the mastermind,” said Nicole Kadis, who works with the project. “She was sitting at her house one day and needed a pick-me-up. She had a brand new men’s large blue shirt, so she decided to wrap it, hide it somewhere in Sister Lakes and post an image of its location on Facebook.”

The project is for people who cannot afford gifts or meals, Kadis said.

“We do not want people to hunt these gifts out as a game,” she said. “We want the gifts to go to the people and families who need them the most.”

Kadis said the project continued to grow in popularity, to the point where community members began donating items. Soon after, Kay enlisted the help of Kadis and fellow Sister Lakes resident Amy Hovey for the project.

Kadis was more than happy to volunteer for the project. With roots in Sister Lakes dating back more than 100 years, she wanted to give back to a community that has given her family so much.
“It is a bit of a family tradition to volunteer around Christmas,” she said. “My grandmother would volunteer at a hospital in Cleveland on Christmas Eve so that hospital secretaries could spend time with their families. My dad is a musician and would play at church for Christmas Eve service. It’s been special to carry that tradition on with my daughter, who comes with me to drop off packages.”

According to Kadis, Sister Lakes residents have been in the giving mood this holiday season.

“From the Dewey Lake area alone, we’ve received more than $500 worth of donations,” she said. “Mostly Chicago people who have reached out to donate.

Next week, the group will provide Christmas meals for families in need. Last year’s meal packages included a ham or turkey with sides, with gift cards included in some packages.

“Typically, meals are picked up quickly,” Kadis said. “We’ll post images of the gifts in different locations and people come to get it. They go really fast.”

The work of Santa’s elves is never done, but Kadis enjoys being able to spread some Christmas cheer in a different, but satisfying way.

“I feel honored that I get to be a part of it,” she said. “This is much bigger than what Ronnie ever thought it would be. It’s been humbling and it feels good that I can involve my daughter in it. My family has been a part of this community for generations. Ronnie is very dedicated to the community as a whole and Amy is, too. This just all generates from a love for Sister Lakes.”