Robert D. Sherman passed away from complications due to COVID-19 while in the care of Spectrum health on Friday, Dec 11, 2020.

In his last moments, some loved ones were able to be by his side. 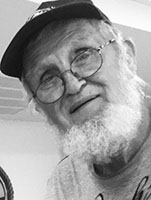 Robert Sherman was born Aug. 6, 1931, in Coopersville, Michigan, in the back of a Ford Model A car; as he so often liked to tell anyone who would listen.

“Bob,” as his friends knew him or “Gramps” as his many grandchildren and great-grandchildren knew him, was a man who enjoyed the simple things. He was happiest drinking Stroh’s with his Grandkids, fixing (read as “breaking”) things around the house and yard, listening to Johnny Cash, and being around family.

Gramps was sharp with a joke, especially ones he had picked up while hanging out with his friends at breakfast, or building the Miss Buchanan float. Many of these jokes were… inappropriate to put it charitably. He liked those kinds the best.

Bob served as part of the Construction Brigade or a C.B. (aka ”Seabee”) in the U.S. Navy where he was mainly stationed in Newfoundland and Morocco, among a few other locations. He spoke positively about his military service, and loved to tell stories of his exploits — some not fit for publishing — to his grandkids and great-grandkids.

After his military days were done, Bob started working at Michigan Bell in 1954 and retired from there in 1991. He moved to Niles in 1955 and married Christine Perkins. In 1957, he set down roots in Buchanan. It was in Buchanan that Bob and Christine raised their four girls — Pam, Linda, Cheryl and Robin. He was active in the Buchanan JC’s for many years, working on organizing, building, and all aspects of the Miss Buchanan pageant, even driving Miss Buchanan float in the Blossomtime Parade — something he always looked forward to.

Always up for an adventure, Bob was the master of “Sherman Shortcuts” making any trip last at least an hour or more. Few complained, because the detours often resulted in great stories, doughnuts or some other pit stop at a local shop or restaurant.

Gramps loved his family unconditionally. He was a staple at his grandchildren’s sporting events and extra-curricular activities. There was never any hesitation to help his children or other family members and was often the one his family depended on most at their lowest moments. If you were doing anything and you needed somebody, Gramps would be there.

Robert is survived by his wife of 65 years, Christine; his four daughters, Pam, Linda, Cheryl and Robin; and his 24 grandchildren and great-grandchildren.

His death leaves a hole in the lives of everyone who knew him, just as he left a smile on their faces in life. And as Gramps would always say, “Don’t worry. In one-hundred years, we’ll all be dead anyway.”

James Allen Bracken passed away Dec. 11, 2020, at River Ridge Nursing and Rehabilitation Center, in Niles. He retired from... read more