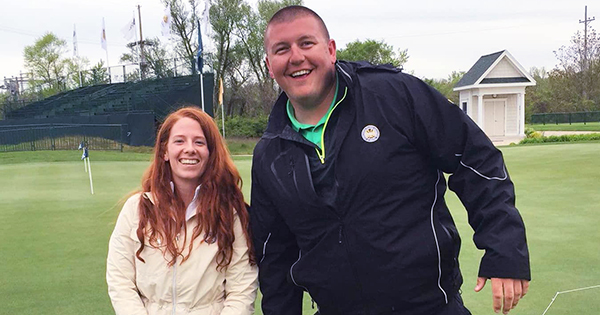 Brandon Haney will be the championship director of the 2022 Sr. PGA Championship at Harbor Shores. (Submitted photo)

BENTON HARBOR — Plans are moving forward for the 2022 KitchenAid Senior PGA Championship at Harbor Shores Resort in Benton Harbor May 21 through May 24.

The PGA announced Wednesday that Brandon Haney will be the championship director for the Memorial Day weekend tournament and that former Chairman and Chief Executive Officer of Whirlpool Corporation Jeff Fettig will return as the general chair.

The 82nd Sr. PGA Championship returns to Harbor Shores after the 2020 tournament had to be canceled due to restrictions outlined by the state of Michigan due to the COVID-19 pandemic. The 2021 championship is scheduled for May 27 through May 30 at Southern Hills Country Club in Tulsa, Oklahoma.

Haney brings plenty of Sr. PGA Championship experience to the tournament, having previously served as an operations assistant in 2014 and operations manager in 2016 and 2018. He recently served as operations manager for the 2020 Ryder Cup at Whistling Straits, which was canceled and rescheduled for this year. Haney will remain in that position until the Ryder Cup is completed.

“Benton Harbor is such a special place, and working with the KitchenAid Senior PGA Championship has been one of the true highlights of my career,” Haney said. “When the opportunity presented itself to take on the role as championship director, I knew I could not pass up a chance to be part of this historic event, which has become so important to southwest Michigan.”

KitchenAid and Whirlpool have been the sponsors for the Sr. PGA Championship since 2012. It continues its commitment to bringing professional golf to southwest Michigan and making a positive economic impact on the area with the tournament, officials said. Its nearly 1,500 volunteers have helped make the event one of the best on the Champions Tour.

“It is an honor to welcome back Brandon to Benton Harbor to help us continue to grow the KitchenAid Senior PGA Championship, which helps us every other year invite the world to consider visiting or moving to our incredible community,” Fettig said. “I look forward to assembling a championship steering committee of passionate community leaders who will work with the fantastic volunteers to host one of the most historic events at one of the best venues in major championship golf.”

The 2020 Sr. PGA Championship would have helped mark the 10th anniversary of the opening of Harbor Shores Resort, which was designed by legendary golfer Jack Nicklaus.

DOWAGIAC — Dowagiac Union Schools Board of Education is seeking interested applicants to fill an upcoming vacant board seat due... read more