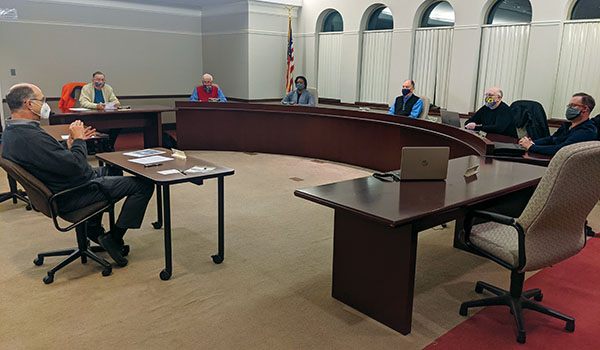 The Dowagiac City Council approved the creation of a geographic information system for Riverside Cemetery, 241 S. Front St., during its meeting Monday at city hall.

A GIS is a computer system for capturing, storing, checking and displaying data related to positions on the earth’s surface. According to city manager Kevin Anderson, the creation of a GIS system for the cemetery will not only allow staff to maintain the cemetery records in a more functional way, it will allow for the public to study the cemetery online to locate the graves they are interested in.

“I think this is exciting,” said mayor Don Lyons. “This is an opportunity to use technology to better serve the citizens we’re responsible to.”

All paper maps, CAD drawings and records will be transferred into the GIS system, creating a portal for preserving these records and an ease for understanding the capacity of the cemetery.

“This has the potential to create some real long-term positive benefits for us,” Anderson said. “The public will be able to do ancestor records as well as be able to see available spots and locations when they are planning for long term burial sites for families. Having access to that should be a real positive benefit to the community as a whole, especially during those times when community members are trying to deal with difficult family situations.”

The city awarded the cemetery GIS project to Wightman out of Kalamazoo. According to Wightman’s timeline, the project will start in early January and be finished by late March for a total budget of $32,500. The company’s proposal would convert cemetery maps to a GIS format, verify locations of graves, develop an online format for the system and assist the city in training.

In other business, the council approved a resolution authorizing a memo of understanding with The Barton Group for economic development services.

According to a memo to the city from Anderson, TBG would help the city’s assist existing and potential property owners and developers in purchasing and rehabbing properties within the downtown area.

“I think it’s pretty timely right now given the number of inquiries we’re getting that we dedicate some additional time to this,” Anderson said. “Using a contracted service is a good way to do it because we can draw from the expertise the firm has in terms of helping people with construction, state grants and some of those things along the way.”

TBG’s responsibilities will include helping to prioritize and budget the remodeling of vacant properties, assisting with possible funding sources through the state or federal government, encouraging and supporting investment that will better the community, recommending other professionals for services such as construction, design, engineering and more.

The firm has been managing the reconstruction of the Dowagiac District Library, according to mayor Don Lyons.

“I think as we look down the road the next six months to a year’s time, we are seeing more inquiries that we can have some direct input on, especially during these challenging times,” Anderson said. “It’s good to have support people around us helping our business community grow and prosper.”

The city will use funds budgeted in the past for the economic development services.

“There will be no new budgetary impact for this,” Anderson said.

In additional business, the council passed a resolution to authorize Anderson to purchase property for support of Department of Public Services operations.

The property will allow the city’s public services operation and airport operations to reduce long term expenditures. The five properties are in the airport approach and maintenance of the vegetation height is required in this area. The total acreage is approximately 20.66 acres and the price will be $50,000.