After graduating from Benton Harbor High School in 1952, Rodney enlisted in the U.S. Navy serving his country proudly during the Korean War. Rodney wed Wanda Hindman in 1956. The two of them were gifted with three children, Bob, Alonda and Kyle. Rodney and Wanda enjoyed many years together prior until her passing on March 20, 1968. 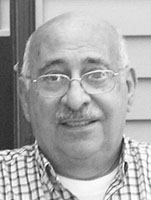 Rodney had a passion for work. He worked most of his career as a Store Manager at National Tea Corporation. After he retired he worked part time for several years at Shelton’s Food Markets and even at age 86 he found himself still enjoying each day he was there. He really enjoyed all of the people he worked with.

Rodney was an avid reader of the newspaper and always kept up with current events. He also looked forward to his trips to Florida and Texas. Rodney also spent many hours in the garden and was a Chicago Bears fan. Rodney always had a special place in his heart for his toy poodle, Lucy.

He was preceded in death by his parents; and his wife, Wanda; and more recent wife, Ginny.

Rodney will be remembered by most friends and family for his jokes and quick-witted sense of humor. He will be greatly missed by his entire family.

Due to COVID restrictions, a private family remembrance service will be held at Brown Funeral Home.

Those wanting to remember Rodney with a contribution are asked to consider Caring Circle Hospice at 4025 Health Park Lane, St. Joseph, MI 49085.

Memories of Rod may be shared with his family at BrownFuneralHomeNiles.com.