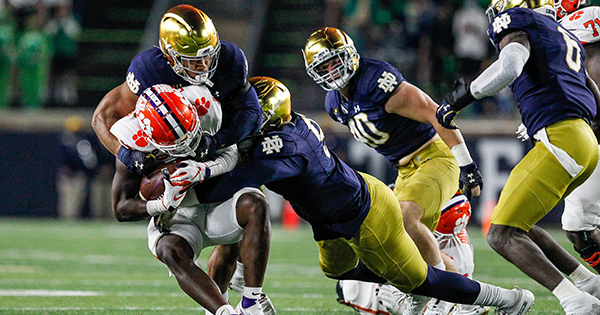 The Notre Dame defense will have to come up big on Saturday if the Fighting Irish want to win their first ACC championship. (Photo courtesy Notre Dame/ACC)

NOTRE DAME, Ind. — One has to wonder just how much Notre Dame can take away from its 47-40 double-overtime win over Clemson back in October.

After all, the Tigers were playing without Heisman Trophy candidate Trevor Lawrence. Additionally, several starters were on defense due to COVID-19 issues.

On Saturday, the Fighting Irish and the Clemson Tigers will meet for the third time since 2018. Clemson holds a 3-2 advantage in the series, which includes the 30-3 win over Notre Dame in the CFP national semifinals.

It will also be Notre Dame’s first Atlantic Coast Conference Championship Game. The Fighting Irish became a full ACC member this season due to COVID-19. Saturday’s game in Charlotte, North Carolina could be the only ACC title game for Notre Dame, but not their final meeting of the 2020 season.

Clemson enters Saturday’s game with a 9-1 overall record and an 8-1 ACC mark. The Tigers are seeking their sixth straight ACC championship. Notre Dame comes in undefeated at 10-0 and 9-0 in conference games.

“Living through this pandemic has been very difficult for them, so this is really what they’ve been chasing — the opportunity to win an ACC championship and to win a national championship,” said Notre Dame coach Brian Kelly.

Even without Lawrence, Clemson was able to put up huge offensive numbers against the Fighting Irish. Backup quarterback D.J. Uiagalelei, a freshman, threw for 439 yards. Notre Dame was able to shut down standout Clemson running back Travis Etienne, which helped it pull out the victory.

Clemson coach Dabo Swinney is hoping that he has his entire team available for the rematch.

“The number one thing is hopefully we can have our team, everybody healthy and ready to go,” Swinney said during the ACC Championship Game press conference. “Obviously, we had a bunch of guys that didn’t play in that game, so getting those guys ready to go is No. 1.”

The key to beating the Fighting Irish for the championship is simple.

“We’ve obviously got to eliminate the big plays. We gave up a lot of big, big, big plays in some costly situations,” Swinney said. “Penalties, a critical turnover. We fumble the ball and score for them. So, we’ve got to do a better job and play a cleaner football game than what we played the last time to have a chance to beat a good team like that.”

Kickoff for Saturday’s championship game is set for 4 p.m. at Bank of America Stadium.

SOUTHWEST MICHIGAN — Since Saturday, the state of Michigan has averaged 3,602 new COVID-19 cases per day, according to the... read more