Dorothy was born Oct. 28, 1920, to George and Alice (LeBoeuf) LeBlanc and grew up in Cheboygan, Michigan. She graduated from Ferris State University (then Institute) in Big Rapids, Michigan, and was employed during World War II by the War Department as a secretary and cryptologist at Selfridge Air Force Base, Michigan. There she met her husband-to-be, David Hanson, a fighter pilot. They were married on Feb. 8, 1947, in Cheboygan, and after four years at Michigan Tech University, moved to Buchanan, where they raised their family. 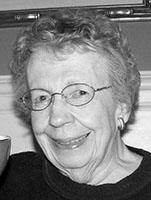 Dorothy played the organ at St. Anthony Catholic Church and was a Meals-on-Wheels volunteer for many years. She was a member of the 30 Club and St. Anthony’s Altar and Rosary Society. After David died on Aug. 4, 2007, she moved to Boutwells Landing, a retirement facility in Stillwater, Minnesota, to be near family.

Dorothy enjoyed music, reading, needlework, gardening and being with friends. Most of all, she loved being with her children and their families. Memorial contributions may be made to a charity of donor’s choice.

A Catholic funeral Mass and burial will be celebrated in Buchanan in 2021. Arrangements have been entrusted to Swem Chapel, Buchanan. Those wishing to leave a condolence online may do so at swemchapel.com.

Rodney G. Rutkowske, 86, of Niles, passed away at Riveridge Rehabilitation & Healthcare on Wednesday, Dec. 9, 2020. He was... read more