Terry Lee Knepple, 41, of Vandalia, passed away at Elkhart General Hospital, after a very short and unexpected illness, on Friday, Dec. 4, 2020.
Terry was born on Dec. 31, 1978, to David and Cheryl (Young) Knepple, in Niles.

He was adventurous from a young age and was always an outdoors type of kid. He spent much of his youth at the family cabin in Baldwin, riding on the trails, and helping on the family farm. In 1998, Terry graduated from Constantine High School where he was also dual-enrolled in the SMC Building Trades. After graduating from high school Terry traveled the U.S. installing and maintaining water filtration systems for North American Aqua in Vandalia. 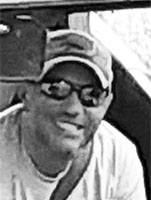 Terry loved to travel; he loved to just drive. He got his CDL and over the years has hauled fuel, beer, propane, and most recently milk for Ward Milk Transport in Elkhart. His love of driving was not limited to the roads though; Terry was an off-road enthusiast. Terry’s main love in life was motocross; he has always had a dirt bike from the time he was a little boy, through young adulthood, and into his 30’s when his injuries made him go from two wheels to four. As Terry always said, “With age comes a cage.” He, his wife Stephanie, and his son Brody continued the family tradition of spending time in Baldwin where Terry was always riding on his dirt bike, side-by-side or even just his pickup. There are no qualms about it…Terry was an adrenaline junkie. If he found some trails, rock hills, or a mud puddle he was going to have some fun in it.
Racing made Terry feel alive. It was not a phase for Terry, it was a way of life. Racing wasn’t a hobby, it was his passion. It wasn’t for everyone but it was for him. “Grip it and Rip it, Terry.”
He also loved to race RC cars with his son, Brody, go camping, and live life in the fast lane enjoying every single moment of it. Terry will always be remembered as his wife and son’s protector, the strongest man they ever knew and the hardest worker they ever knew.
He was preceded in death by his paternal grandparents, Beverly Knepple and Max Knepple; maternal grandfather, Clyde Young Sr.; and uncle, Clyde Young Jr.
Terry is survived by his wife, of 12 years, Stephanie (Hershberger) Knepple; son, Brody; parents, David and Cheryl Knepple, of Vandalia; maternal grandmother, Bertha Parmalee, of Constantine; maternal step-grandmother, Carol Young, of Jones; sister, Brandi (Keith) Roberts, of Vandalia; nieces, Kylie and Taylor Roberts; and many extended family members and close friends.
As Terry’s health quickly declined on Dec. 4, the family was approached about the possibility of Terry being an organ donor. Terry’s son, Brody, made the very important decision for his father to be a hero to other families and chose to give life to other families through tissue donation. In keeping with Terry’s wishes, his family will be remembering him privately at this time and have a celebration of his life in the spring. Those wishing to make a memorial donation in Terry’s memory may do so in care of his wife to help further Brody’s education.
Condolences, photos, and memories may be left for the family at BrownFuneralHomeNiles.com.
Arrangements have been entrusted to Brown Funeral Home & Cremation Services, of Niles.