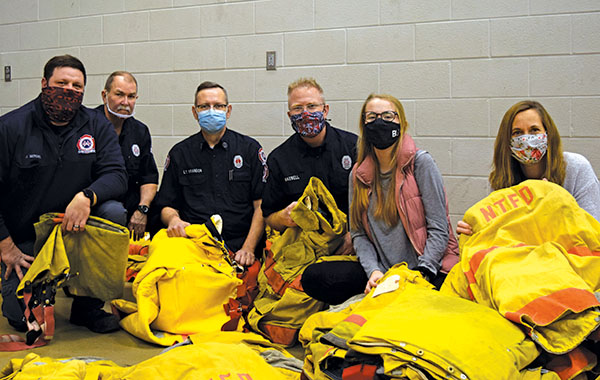 NILES TOWNSHIP — The tones dropped at the Niles Charter Township Fire Department just as plans to begin packing up retired fire gear to donate was about to begin on Wednesday evening. The station’s firefighters responded to the call, and returned in high spirits to continue with the deed, bringing retired firefighting pants and coats out of storage to be folded, bagged, vacuumed down to fit in a shipping box, and packed in by volunteers and firefighters.

“We are donating approximately 30 sets of gear,” Maxwell said. “It’s pants and coats. Not the boots, helmets and gloves.”

The volunteers, including Thomas’ wife Lisa and their daughter Annalise, paired the coats and pant sizes together as they packed to make it easier for the recipients to sort. Many noted whose gear was going, and reminisced retired firefighters.

“We are always looking for more volunteer firefighters,” Thomas said. “Most people don’t realize that many departments are run with about 70 percent volunteers.”
Maxwell, his wife, Lisa, and their daughters lived in the Philippines in 2009, while doing missionary work there. During that time, Maxwell became acquainted with one of the local fire departments in Bontoc, a municipality in the Mountain Province. During that time, Maxwell was able to connect the department with donated turnout gear.

“The department I had interacted with and had sent gear to before did not have any turnout gear,” Maxwell said. “They were in a small mountain town. They had a fire engine, but it did not run. They relied on water delivery trucks.”

Maxwell explained that in the region, many residents had water tanks on their properties, in a similar size and fashion to what most people recognize as a natural gas tank.
“They will call a delivery truck to fill it up,” Maxwell said. “There are a lot of water trucks driving around, so that was their plan.”

The addition of turnout gear will give the firefighters more protection when they battle a blaze.

“The gear will make a two-month long journey,” said Lisa Maxwell, of the donated gear traveling from Niles to their contact, the director of the department of interior and local government in the Cordillera Administration Region of the Philippines. The Maxwells had raised money through both the Niles Charter Township Fire Department and through the church Thomas serves as lead pastor, College Park Missionary Church in Mishawaka. The cost to ship the gear totaled around $450.

As it is shipped over and will travel by boat, the gear will not be subject to customs charges.

DOWAGIAC — Due to a shortened season because of the COVID-19 pandemic, the Wolverine Conference did not crown a champion... read more