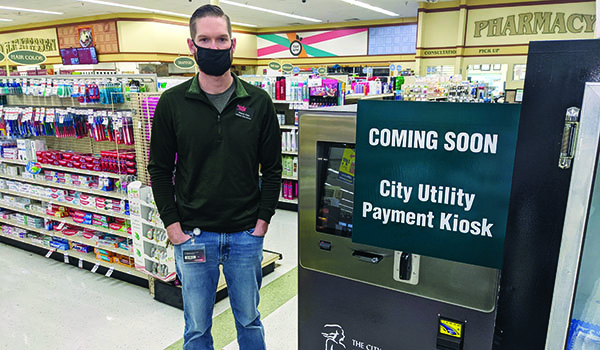 DOWAGIAC — City of Dowagiac utility customers will soon be able to pay their utilities at a safe, secure location away from city hall.

The kiosk, located in the main lobby area of the store, will offer citizens more access to city services outside of the traditional Monday to Friday, 8:30 a.m. to 5 p.m. schedule. Locating the kiosk at Family Fare would make the kiosk available 18 hours a day, seven days a week.

While not yet operational, Family Fare assistant manager David Rife expects the kiosk will be activated before Christmas day.

“It’s going to be great for a lot of the customers that come in here,” Rife said. “It’s going to make everything a lot easier for them. Rather than calling in payments, paying online or directly at city hall, this gives customers more options and should be convenient.”

The Dowagiac City Council unanimously approved the resolution authorizing the purchase of a payment kiosk for utility payments back in July. The anticipated budget for one kiosk, the software required for it and the first-year service agreement will be approximately $19,000. The annual cost after the first year is expected to be $2,000.

“Over the last two years, the city council has made it a priority to make City Hall more accessible outside of standard business hours,” Dowagiac City Manager Kevin Anderson said. “Not everyone has the technology or bank accounts to be able to pay online. We wanted to give people without those means access to city utility services.”

The kiosk will be free to use and will accept cash, check or credit card payments with no fees of any kind.

“The kiosk will have the same kind of feel as an automated telling machine,” Anderson said. “You will be able to access your account and pay bills. Working with a store like Family Fare made sense for us and made sense for them. The kiosk can serve the community long after this pandemic passes because of the convenience of paying a utility bill while shopping for groceries and having access to it 214 hours a week.”

The kiosk is the latest endeavor the city council has made to offer more avenues of service to the community. The council installed a drive-up utilities portal, affectionately known as “the Tube,” directly behind city hall in September.

“With the department of health’s orders, we’ve got the lobby area closed down,” Anderson said during a November city council meeting. “But what has been an incredibly helpful thing is to have that tube out there. People have come to the door, and we’ve been able to direct them to the Tube, and we can handle business and be able to have that face-to-face contact with people. I think it’s really allowed us to still give the same effective counter service to the customers. We’re getting some really good feedback from folks right now when it’s started becoming pretty heavily used over the last four or five days as people become more aware.”