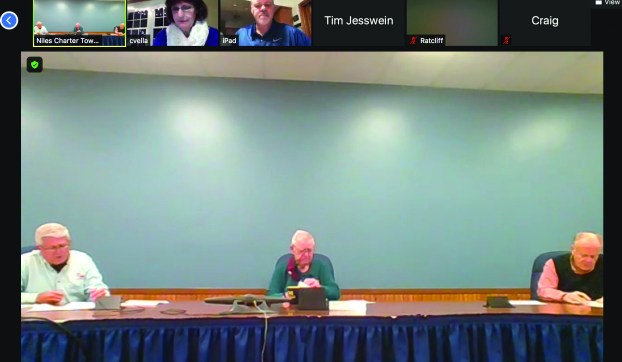 The Niles Charter Township meeting Monday evening was hosted on Zoom for the first time since COVID-19 arrived in Michigan. The meeting heavily centered on discussion surrounding the township’s fire department needing a fire chief, and using a location as a drive-thru COVID-19 vaccine location. (Leader photo/CHRISTINA CLARK)

NILES CHARTER TOWNSHIP — The Niles Charter Township Monday evening board meeting was hosted via Zoom for the first time.

During the meeting, board members discussed potential future changes to the Niles Charter Township Fire Department, which has not had an official fire chief since Gary Brovold retired Aug. 1, after 37 years on the department.

The township board also discussed a request by the Berrien County Health Department to use the fire station on Third Street as a location for administering COVID-19 vaccines in a drive-thru fashion in one of the fire engine garage stalls.

Township treasurer Jim Ringler presented the discussion topics of the township’s fire department. Ringler said he had met with the fire department on Nov. 24, and had received several requests from the firefighters there.

“Starting in January, [the firefighters] would like to have an interim fire chief, not an acting chief,” Ringler said. “Someone who would act as interim chief until we hire a full-time chief.”

“I want to thank them for doing that,” Ringler said.

The discussion continued as Ringler encouraged the board members to consider who might be a good interim chief from the Niles Charter Township Fire Department, as they move toward hiring a new fire chief. Ringler said they would consider the pros and cons of hiring from within the department and outside of it, as well as what to look for in a candidate.

“As we look to the process of this board appointing a permanent chief, I would like every board member’s input into the process,” Ringler said.

Ringler also presented to the board members that the Berrien County Health Department had contacted the Niles Charter Township fire department about the use of its station, located at 2049 S. Third St. for COVID-19 vaccinations.

“There are other locations [the health department] is trying to get within Berrien County,” Ringler said. “We would probably serve the Niles area. Chikaming Township is going to serve the southwest [county]. There will probably be something in the St. Joseph area, and something in Coloma.”

Ringler said the health department had discussed a voucher system for those eligible to receive the vaccination, and having two days a week where the vaccines would be provided at the drive-thru location.

Township Clerk Terry Eull asked if the fire stations would serve as a vaccination location from the first tier of vaccine employments, for first responders, medical professionals and long-term care facility residents, to the general public deployment.

Ringler said he believed that to be the plan, making the site a regular one during the months the vaccine would be deployed in such a manner.

The board will vote on whether to have the fire station used as a vaccine administration site by the Berrien County Health Department at its next meeting on Dec. 21.