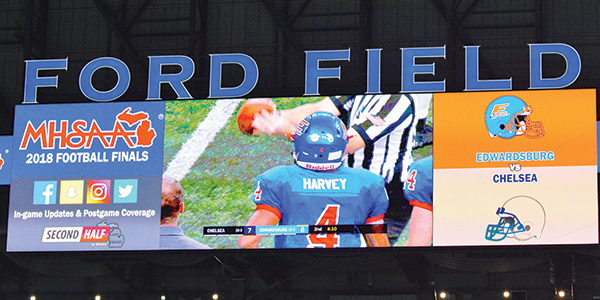 Edwardsburg and the remaining teams in the state playoffs will have to continue to wait and see if the fall sports season will be concluded. (Leader file photo)

NILES — It appears that high school sports will not be contested in the month of December after the state of Michigan and the Michigan Department of Health and Human Services announced the extension of its order to combat rising COVID-19 numbers another 12 days.

On Nov. 15, Michigan Gov. Gretchen Whitmer and the MDHHS announced a three-week pause in the state’s reopening, which was set to expire on Tuesday.

Monday afternoon, the governor and the MDHHS announced that those restrictions, including in-person teaching at high schools and colleges, along with organized sports other than professional, would be extended another 12 days until Dec. 20.

The Michigan High School Athletic Association, which had sent a letter to the governor and the MDHHS on how they could safely conclude the fall sports season, including excluding fans if necessary, was disappointed with Monday’s announcement.

“We realize the crisis our medical caregivers and first responders are navigating and understand the need to continue the pause,” said Executive Director Mark Uyl. “However, the MHSAA had provided a detailed plan to both Gov. Whitmer and MDHHS that would have completed fall tournaments with no spectators as safely as possible during the month of December along with allowing winter sport practices to resume. While we are disappointed in today’s announcement, we will continue to look forward as we remain committed to play three sports seasons to their conclusion.

“Although this is not the decision we had hoped for, we understand that this is for the safety of our student-athletes,” said Buchanan Athletic Director Mark Frey. “We will continue to work with them remotely, make sure that our student-athletes are where they need to be academically, and prepare them for the mental side of their respective sport.”

Edwardsburg Athletic Director Kevin Dean is still holding out hope that the season can be completed. The Eddies are still playing for state titles in volleyball and 11-man football.

“I am disappointed about the delay in fall sports, being so close to the end of the season and having two teams still competing,” he said. “Our coaches and athletes have worked extremely hard through a difficult fall season and deserve the opportunity to finish.”

Cassopolis Athletic Director Chad Gardner thinks it will be tough to finish fall sports and get a meaningful winter sports season in without creating issues with spring sports.

“With today’s announcement that high schools will still be remote learning and all sports are on hold until the state lifts the restrictions is a huge blow to the fall sport athletes especially because it will be increasingly more difficult to get the finals in without interrupting other sports,” he said. “For small schools this could have a truly dramatic impact on the spring sports if this is when the fall sport finals are scheduled because so many of the athletes in the fall sports participate in the spring sports.”

Gardner added that without the COVID numbers coming down, the state and the MHSAA have to do their best to look after the student-athletes.

“At the end of the day, the biggest priority is the safety of our athletes and their families. Until the virus is under control I think it was the appropriate move,” he said.

Niles AD Jeff Upton expected that the orders would be extended.

“It was not a huge surprise,” he said. “We also remain committed to getting in-person high school back in session. That must remain the No. 1 priority.”

The MHSAA Representative Council will meet on Wednesday of this week to chart out another plan for finishing fall and restarting winter.”
This is a developing story. Watch for further updates, including comments from area athletic directors, as they warrant.

ST. JOSEPH – The U.S. Food and Drug Administration has authorized the emergency use of the monoclonal antibody, bamlanivimab, for... read more