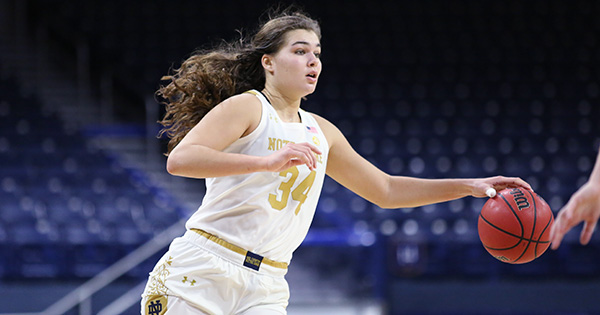 NOTRE DAME, Ind.  – Notre Dame women’s basketball (2-2) battled back in the second half and closed out a gritty IUPUI Jaguars (2-1) squad on Sunday for the 65-58 victory.

The Fighting Irish outscored the Jags 40-25 in the second half, including a 7-0 run to end the game.

Maddy Westbeld tallied her first 20-point scoring performance with 22 points on 9-of-14 shooting, with 12 coming in the fourth quarter. She also notched six rebounds, four assists and two steals. Anaya Peoples recorded 14 points on 6-of-13 shooting. Both Westbeld and Peoples earned their fourth straight double-digit scoring performance in as many games.

Next, Sam Brunelle achieved her first game in double figures with 11 points on 5-of-8 shooting, including a 1-for-2 mark from three-point range.

“I was pleased by the way we bounced back today. Coming in after that tough Michigan loss, which was a learning experience for us. We really worked on our urgency on defense,” said Irish Head Coach Niele Ivey. “Kind of an ugly game, but in the second half we went down and dug in and executed better. My super freshman Maddy Westbeld stepped up. Kate and Alasia Hayes had productive minutes. I know what we need to work on and today was a great opportunity to get better and grow. I’m trying to get this team to focus on competing and learning how to win.”

IUPUI took a 33-25 lead into the half primarily thanks to Sydney Roule’s 13-point showing, plus their advantage on the glass, out-rebounding Notre Dame 22-7. It was also a turnover heavy half for both squads, as the Jags coughed the ball up 15 times compared to Notre Dame’s 11.

A motivated Irish squad came firing out of the gates with a 14-5 scoring start to the third, connecting on five of their first six shots to capture the lead at 39-38 at the 4:18 media. The Irish defense stepped up as well, holding IUPUI scoreless from 7:15 to 2:05. All-in-all, the Irish outscored the Jaguars 20-12 in the period, shooting 7-of-10 from the floor.

Notre Dame and IUPUI kicked off the fourth quarter deadlocked at 45-all. After the Irish scored the first five points of the period, the Jaguars countered with an 8-0 run in just 62 seconds to recapture the lead at 53-30 with 7:42 remaining.

Dara Mabrey ended the scoring spree with her first bucket of the game, followed by an and-one by Westbeld. The Irish then rode the momentum to an 8-0 run to go up 58-53.

Five straight from the Jags knotted the score at 58-all with 3:03 remaining, but Westbeld answered with a momentous three-pointer to push the Irish back out ahead. That led to a dominant 7-0 run over the final 2:44 of the game for the 65-58 victory.

The Irish look to start ACC play on a high note, when they host Georgia Tech at 2 p.m. Sunday on ACCNX.

NILES  — The Niles Post Office will be offering extended Sunday retail hours during the month of December to help... read more