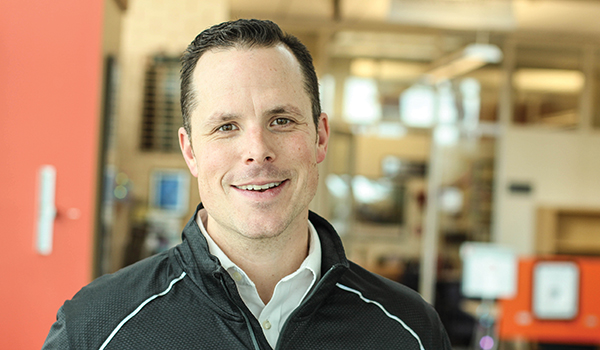 He will be splitting his days between the two campuses.

“We have teams on both ends that try to support us in whatever we are trying to do,” Burleson said. “If I’m not in South Haven or not in Niles, those teams can pick up anything that might come their way.”

He stays in close contact with teams on both campuses to ensure they have what is needed from him, and he can keep moving program progress forward.

“What I’ve been finding out as I have been researching the campus in Niles, is that it has a rich history of dual enrollment students and the Early College Academy,” Burleson said. “I want to strengthen and grow that piece of it.”

According to Burleson, around half of the students at the Niles LMC campus are dual enrolled students. He wants to continue working with the high schools in the area to ensure students are receiving advising that will help them map out the paths they are searching for in their futures.

“It’s already there. It’s already been a well running ship, but I want to keep it going and growing,” Burleson said.

Other areas of focus Burleson has for the LMC Niles campus include overseeing the new Commercial Driver’s License training program, which helps prepare students for a career as a commercial truck driver. The college has partnered with N&M Transfer for the program.

“One of the big things when you go to build a program, you make sure it is needed within the area,” Burleson said. “You talk to the stakeholders and community members. I want to find out how I can help build something within the community that’s sustainable.”

He has already been seeing the success with the CDL program in Niles with hopes to expand upon its early success.

“That program is going really well,” Burleson said. “It’s been really good. The first week of class is done on our campus, post-COVID-19, and the second two weeks of the program will be done at N&M Transfer [located next door.]”

The partnership has been going well since its launch earlier this year.

“One of the great things overseeing both campuses is the seeing the commonalities,” Burleson said. “In South Haven, Niles, Allegan, CDL drivers are needed. My goal with the CDL program is to build it up into South Haven, so the students will be able to travel back and forth between campuses.”

Burleson’s passion for education comes from his start in the field as a high school history teacher. His path took him from teaching education, to teaching high school history. He was nominated in 2012 for Michigan’s Teacher of the Year. Following the nomination, he took a role in administration, and moved as a curriculum coordinator, where he helped educators learn more ways to teach.

He moved his way up, always working in the field of education, until LMC called.

“I was actually able to teach a few college classes in history for LMC,” Burleson said.

The classroom is where his passion lies, and he seeks to use his knowledge and passion for teaching to advise his role as director of both the South Haven and Niles campuses of LMC.

“My passion is the high school, in the classroom,” Burleson said. “I want to make sure students have all the wraparound services they need. It does help a lot of the dual enrollment students. I know where they’re coming from.”

NILES — Throughout the past year, one of the most visible constructions underway in downtown Niles has been the Post... read more