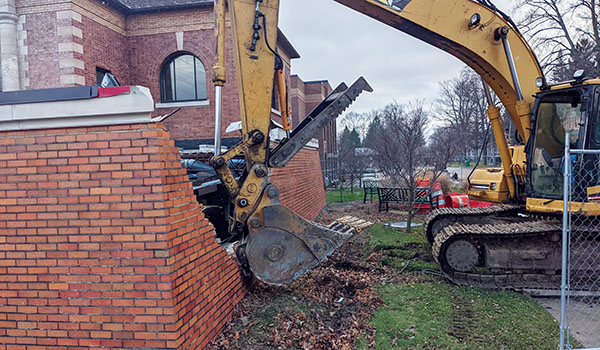 DOWAGIAC — The Dowagiac District Library is in the process of a much-needed facelift.

Erected in 1903, the Carnegie front is being demolished before being restored as part of the facility’s project, which is scheduled to be completed by the first quarter of 2021.

The expanded wing of the library, 211 Commercial St., Dowagiac, was completed last month. It includes a community room, study rooms, a quiet reading area and more room for books and computers.

“I’m really happy with how they’ve matched the historic brick and stonework,” said Library Director Matthew Weston. “That’s the historic part of this project. I’m excited to see how they’re able to match everything. We’re kind of cramped in the new part of the building, so it will be nice to spread out again with the space we’ve gained.”

Engel said one of the project’s biggest challenges was the foundation.

“With the expansion, our biggest hurdle was digging its 17-foot basement,” Engel said. “The foundation was in beach sand, so we had to shore it up. With the 1903 building, you just don’t know what you’re going to uncover. We’re taking it day by day, for sure.”

Mulder’s Moving, of Kalamazoo, relocated the library’s large temporary shelving into the community room of the new building to hold the books that cannot stay in the areas of renovation, Weston said. Those books will be moved back into the old section some time in February when the renovations are complete. Other shelving will be going into the basement, where the library plans to develop a ‘library of things’, such as tools and educational kits, that can be lent out to the public.

The library is currently open from 10 a.m. to 6 p.m. Monday to Thursday, 10 a.m. to 4 p.m. Fridays and 10 a.m. to 3 p.m. on Saturdays. Patrons are asked to wear a mask upon entry. While the new wing has taken some getting used to, Weston is pleased with the finished product.

“It’s taken a couple of weeks,” Weston said. “This is our third week, and it has taken that long to get used to the new setup. I have to say, it’s nice on the inside. Everything functions better and is naturally spaced out better. We have a lot of natural light, which is really nice. We have a nice view.”

Due to capacity limitations, the library is also offering curbside services.

To access curbside pickup, patrons are asked to call the library to request items or go to the library’s website to order online. Staff will call when items are available for pickup. The library is also offering copying and faxing as well as informational services.

“We wanted to stay open for the community during this process,” Weston said. “I encourage people to sign in at the door and take a look at the new building. All of our books and movies are currently available.”

DOWAGIAC — The ongoing COVID-19 pandemic has hindered businesses across the state, but for one local Christmas tree farm, business... read more