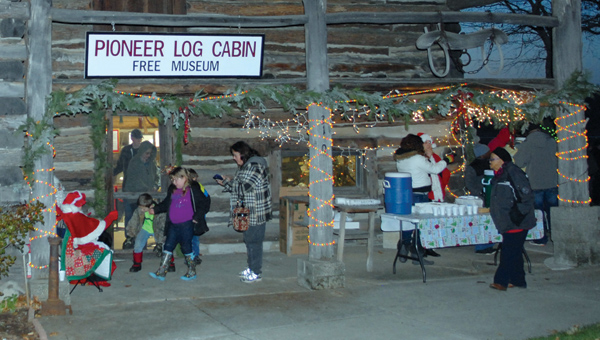 Instead of the annual community tree lighting at the Pioneer Log Cabin, Cassopolis will host a Christmas Cruise on Dec. 5. (Leader photo/File)

CASSOPOLIS — In many communities throughout the state of Michigan, holiday plans have had to be altered, postponed or canceled all together.

The village of Cassopolis is no different. However, instead of canceling its annual holiday kickoff, the Cassopolis Main Street Committee has joined forces with the Cassopolis/Vandalia Area Chamber of Commerce to create a Christmas Cruise on Dec. 5.

The first Saturday in December has normally been the lighting of the community’s Christmas tree at the Pioneer Log Cabin, along with several other events.

This year, the village and the chamber decided that due to COVID-19 guidelines from the state of Michigan, hosting a tree lighting was not an option. But instead of just canceling the event, they decided that Dec. 5 would be a great way to show off the village’s new Municipal Complex, as well as kick off the holiday season.

The Cassopolis Main Street Committee and the Cassopolis/Vandalia Area Chamber of Commerce also decided that they could help out community businesses at the same time.

“They purchased gift certificates from our local food establishments inside the village limits, and some of the lucky participants will be receiving them in their gift bags as they go by,” Sarratore said. “The village and the chamber felt it was really important to try and support them and influx them with some funds as they struggle through some of these shutdowns. It is going to look a little bit different, but it still should be good. We are still going to be here and we are going to have goodies and treats to hand out.”

Sarratore is encouraging participants to take a look at some of the other Christmas lights that may be set up by the residents by then. She also believes that Santa will be in town to wave at the cars as they drive by.

“We will be adhering to social distancing,” Sarratore said. “Our elves will have masks and gloves on that are handing goodie bags to the cars as they come by.”

The event is being co-sponsored American Electric Power Foundation, Cassopolis Dental, and Mark and Glenda VanDusen.

CASSOPOLIS — The Cassopolis Village Council met via ZOOM for a special meeting to approve a resolution to co-sign an... read more