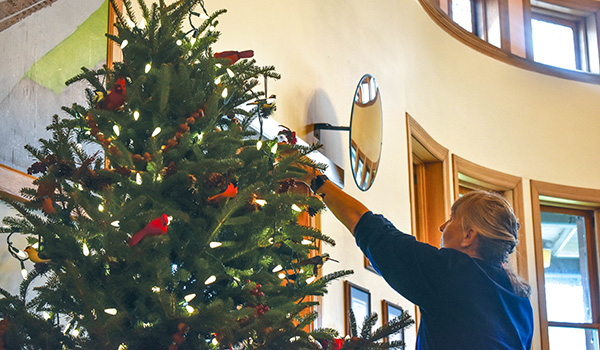 NILES — The Niles Amtrak depot will be lit with holiday cheer again this year, but without the usual ceremonial gathering with carols that area residents have grown to enjoy each year.

The Hometown Christmas at the Niles Amtrak Depot has been a tradition since 1991, but this year, like many things, the event has been impacted by the COVID-19 pandemic.

“As long as we are all here next year to enjoy it, that’s the main thing,” Sobecki said. “We want to keep people safe.”

The cancellation was announced before the latest “pause to save lives” order from the Michigan Department of Health and Human Services. The club members decided it would not be safe to host a large gathering of people in light of the COVID-19 pandemic.

The event usually includes a speech from the mayor or another prominent figure in the city, Christmas carols and the raffle of an Amtrak ticket. Santa Claus usually makes an appearance from the North Pole to check in on festivities in at the station.

“Hopefully, this [event] will continue next year,” Sobecki said.

While the event associated with unveiling the holiday decorations is canceled, the Four Flags Garden Club members will still be decorating the depot.

“If people want to see the depot decorated, it will still be decorated with the tree inside,” Sobecki said. “Look for the lights. They will be turned on within the next week.”

The outdoor decorations will go up first over the weekend after Thanksgiving, followed by the Christmas tree inside the station the week after.

Sobecki said the Four Flags Garden Club members were looking forward to decorating, but were going to adjust to keep themselves distanced from one another in the process.

“We all can’t be around the tree at the same time,” Sobecki said. “We can see each other at a social distance.”

The lights will be flipped on by Jack Plummer, but the timing was undisclosed, making it a surprise for anyone happening upon the station on the first evening it is lit for the season.