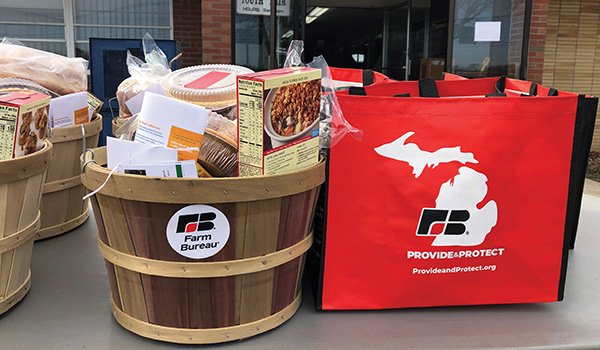 BERRIEN COUNTY — What started as an idea three years ago has grown into an event that fed more than 1o0 families in Berrien County this Thanksgiving.

In 2018, Tim Ames had an idea to help feed needy families in the community that has really sprouted wings and taken flight.

As the appointed P&E Chairman for Berrien County Farm Bureau, Ames began in 2018 with the idea of growing 50 turkeys on his farm to share with families in need in his community.

Over the past three years, this program has grown in size and scale. On Nov. 21, 110 baskets were given to families throughout Berrien County. Each basket was filled to overflowing with all the ingredients for a traditional Thanksgiving feast.

“In fact, a reusable shopping bag to carry the frozen turkey had to be added this year,” said Jennie Koebel, administrative assistant at Berrien county Farm Bureau. “Over 4000 pounds of food was distributed over a three-hour period.”

“Thanksgiving is a time to share the bountiful harvest,” Ames said. “What better way than to fill a basket with food for a delicious meal to share with friends and neighbors. As a member of Farm Bureau, I wanted to give back to the community. We are farmers doing our job to feed the world.”

BENTON HARBOR — Due to the ongoing pandemic and the recent rise in COVID-19 cases throughout the state, Lake Michigan... read more