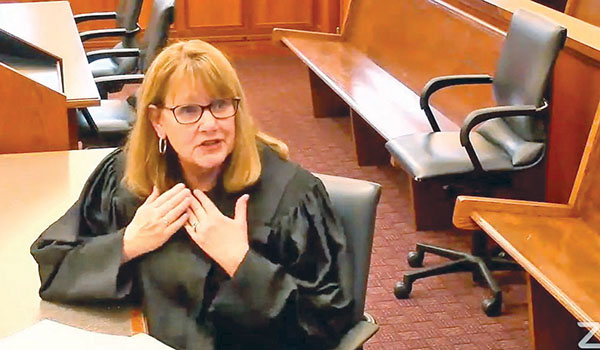 It is a goal she sets for herself each year, always failing when tears begin to cloud her vision as she watches adopted children and families celebrate their new lives together.

Even though this year’s Adoption Day celebration was hosted virtually due to the COVID-19 pandemic, it only took 20 minutes for Dobrich to lose the challenge she set for herself. Once the tears started flowing, they did not stop, leaving her reaching for a box of tissues as the Michigan Supreme Court recognized her for years of dedication to Michigan children and families.

“Alice Walker states, ‘Thank you is the best prayer that anyone could say. Thank you expresses extreme gratitude, humility and understanding,” Dobrich said as she accepted the award. “Alice Walker defines my feelings today on receiving the Daniel J. Wright Lifetime Achievement Award.”

The award, jointly sponsored by the Michigan Supreme Court and the Michigan Department of Health and Human Services, was established in honor of the late Daniel J. Wright of Grand Ledge. A former director of the Friend of the Court Bureau and Child Welfare Services division of the State Court Administrative Office, Wright helped create the state’s “adoption forums” to deal with adoption barriers that kept children in foster care. He also worked on legislation to give foster children a voice in decisions about their lives. The law now requires courts to consult the child when hosting a hearing about permanent home placement.

The award is open to attorneys, judges, caseworkers, court staff, employees of public and private agencies, nonprofit employees and others who have a significant record of helping Michigan families and children, according to Michigan Supreme Court Justice Elizabeth Clement, who presented Dobrich the award Tuesday.

To be eligible, a nominee must have 10 or more years of experience in the field and a record of achievement with demonstrable impact.

Dobrich was nominated for the recognition by Carol Bealor, director of Cass County Friend of the Court. Only part of her eight-page nomination letter was read during Tuesday’s ceremony.

“Judge Dobrich has been a trailblazer for children and families by spearheading the problem-solving court movement in Michigan with the creation of Michigan’s first family-dependency treatment court here in Cass County in 2003,” Bealor’s nomination reads. “Judge Dobrich’s creativity, leadership and relationships among community stakeholders enable the Cass County Family Treatment Court to develop and grow with buy-in from community partners that is often hard to come by.”

After reading Bealor’s nomination, Justice Clement said the words written in the nomination ring true. Clement has always known Dobrich to focus on children and families — not only in Cass County but also in the entire state of Michigan.

“[Dobrich] is far and away our champion and our leader in this state when it comes to children and families,” Clement said. “She is a true mentor, a true leader. She inspires all of us every time we interact with her, to hear what she is doing, to hear her incredibly creative ideas about how to move forward and how to do better. When I think of Judge Dobrich, I think, ‘how do we do better?’ I can’t think of anyone more deserving of this award.”

When her time to speak came, Dobrich thanked the Michigan Supreme Court and said she was honored to be grouped with past recipients of the Daniel J. Wright award. She also paid tribute to the Native American community, which she works closely with through interaction with the tribal courts.

Finally, she thanked and recognized the children and families with whom she has worked for decades, which made her eligible for Tuesday’s award.

“It is with gratitude that I am able to say that I have had the opportunity to work with children and families,” she said. “Thank you.”

NILES — Black Friday has historically garnered quite a bit of buzz, with footage of shoppers lined up waiting for... read more