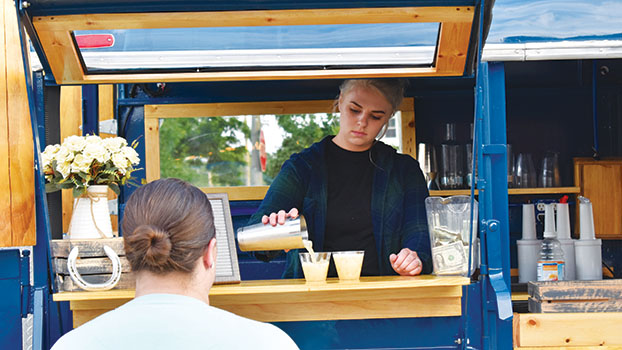 The zone was proposed by the Main Street Downtown Development Authority, and will be located on N. Second Street, closing it to through traffic next to Main Street, for the same area traditionally used for Third Thursdays downtown. It will not block the parking lot and alley access.

According to the proposal by City Administrator Ric Huff, the area will be a designated outdoor area where food trucks may operate, restaurants may deliver food, and alcoholic drinks from properly licensed establishments may be consumed.

The space may also serve as an entertainment venue where people can “Gather, socialize, drink and eat in an outdoor venue,” the proposal said.

“Instead of proposing this be in place until spring, or three years, [I wanted] to set a date where this can be re-evaluated if there are any issues or things that need adjusted,” Huff said. “It could not be extended, or extended, for another week or another five months at that point.”

Council member Jessica Nelson expressed support for the idea. She said she had seen similar designated areas in other cities around the country.

“Having a really dedicated area where people can congregate, especially in light of COVID-19, having an outdoor area where it’s safe for businesses to kind of do their things – I am really excited to see how this pans out,” Nelson said.

Council member Boggs expressed concern about how late the area would be operating. Main Street DDA Director of Marketing and Administration Lisa Croteau said she assumed it would be beholden to the same rules as restaurants and bars in the area, where they must cease service at 2 a.m.

“The adjoining business owners and residents have already been contacted by Lisa [Croteau] and they are in full agreement,” Huff said.

Before the vote was taken by city council members, Mayor Nick Shelton, voiced his own support for the outdoor dining zone.

“I think this is a cool idea. It’s another way to support out local businesses during a very, very tough time,” Shelton said. “I’m not sure how many people will want to eat outside in the dead of winter, but if we can do anything to stimulate our businesses, I think it makes sense.”

NILES — Rite Aid is updating its COVID-19 testing program through its partnership with the U.S. Department of Health and... read more