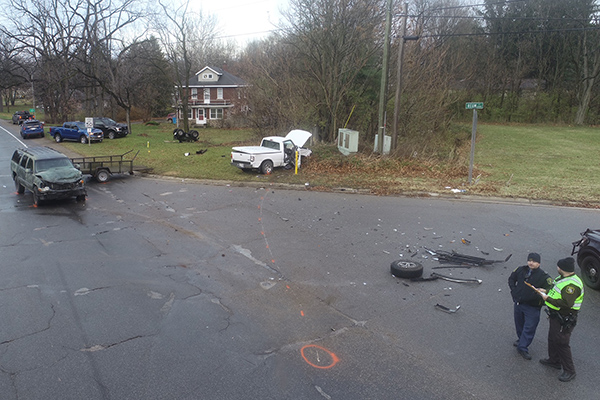 The sheriff’s department reported that it was dispatched to the scene at East Main Street near Reum Road at approximately 3:40 p.m. There they found Octavio Quispe, 64, of Niles, lying on the ground pinned under the passenger door of his vehicle. Quispe was unresponsive.

With the help of a Michigan State Police trooper, the truck was lifted enough to free Quispe.

CPR was initiated and the victim eventually regained consciousness before being transported by SMCAS to South Bend Memorial Hospital for serious, but not life-threatening injuries.

The driver of the second vehicle, Matthew Borsa, of Edwardsburg, was transported by Edwardsburg Ambulance to Spectrum Health Lakeland in Niles. He was treated and released with minor injuries.

Crash investigators learned that Quispe was pulling out of Birchcrest Mobile Home Park in his For Ranger pickup truck when he pulled into the path of Borsa’s Chevrolet Suburban, which was traveling down East Main Street.

Quispe’s vehicle ran off the roadway and came to a rest near a wooded area.