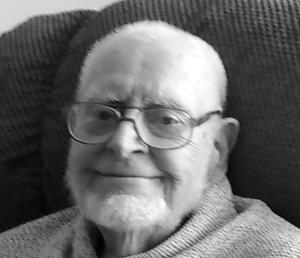 Private burial will take place at New Troy Cemetery in New Troy. A celebration of life service will be announced at a later date. Memorial donations in Bob’s name may be made to St. Joseph-Lincoln Senior Center or the Baroda American Legion. Those wishing to sign Bob’s Memory Book online may do so at starks-menchinger.com.

He graduated from Cassopolis High School after serving his country in the U.S. Navy during WWII.

On Dec. 6, 1947, he married the former Norma Payne. Bob owned and operated Bob’s Barber Shop in New Troy for 30 years before starting his second career as a machinist at F.P Rosback Co. in St. Joseph where he worked for several years.

As a younger man, Bob was active in competitive skeet shooting. He enjoyed traveling with his wife to Alaska, boating, fishing, camping and playing Euchre at the St. Joseph-Lincoln Senior Center. Bob was a member of the Baroda American Legion and formerly of New Troy American Legion.