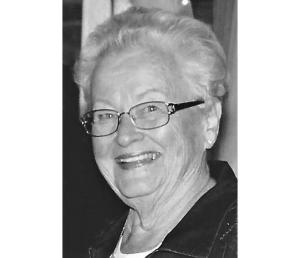 Barb passed peacefully in her sleep from a stroke.

She was preceded in death by her husband, Robert E. Lane, her brothers, Robert (Mary) Solfisburg and Lloyd (Rosemary) Solfisburg. She is survived by daughters, Kay Lane and Kimberly Lane (Ron) Evans, two grandchildren, Mitchell (Lisa) Evans and Molly Evans as well as three great-grandchildren.

Barbara was originally from Chicago and moved to Edwardsburg in 1954 when she married Bob Lane. They celebrated 63 years together before his passing in 2017.

Barb loved playing bridge, her golden retrievers and Arabian Horses. Bob and Barb traveled extensively while in good health and had many stories to tell from their travels. Always the entrepreneurs, Bob and Barb started a dress store in Edwardsburg in the early 1970s. When that was sold, Bob went on to start a new business and Barb did all of the book work for the new business. Bob was often heard saying, “You can take the girl out of Chicago, but you can’t take the Chicago out of the girl.”

In her later years, Barbara developed dementia which limited her travels and her social events. Barb never forgot who her family was, even though at times she was living in the past. Barb suffered a stroke in April of 2019 which weakened her condition.

Arrangements are by the Paul E. Mayhew Funeral Home, in Edwardsburg.