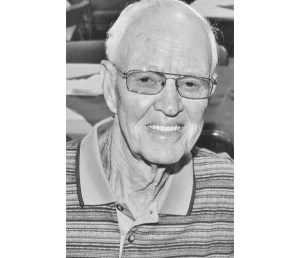 Wayne Delno Nelson, 93, of Niles, passed away on Saturday, Nov. 14, in his home with his family by his side.

Wayne was born on March 20, 1927, in Portland, North Dakota, to the late Hartvig and Amelia Nelson. He spent his early years farming with his father.

On Jan. 28, 1951, he married the former Betty Molenaar. In 1953, they moved to Niles where he was employed by Kawneer for many years and later retired from Modineer.

Wayne was a very busy man — always active doing something. He enjoyed wood working and construction — numerous examples of which can be seen in the family home. He was the ultimate “Handyman” who could fix just about anything. Wayne enjoyed collecting John Deere tractors and belonged to the “2 Cylinder Club.” He had spent a lot of hours on those tractors in his youth. He also enjoyed days on the lake boating with his family and time spent at his lake home. Wayne loved his motorcycles. He and Betty traveled the “Lower 48” states on a motorcycle, usually camping and often with friends or family.

In retirement, they continued to pursue their love of travel with visits to Hawaii, Alaska, Australia, Europe, Asia and South America. They also became snowbirds, spending 24 winters in their motor home in the southern U.S. and Mexico.

Wayne was a member of Christ the King Lutheran Church in South Bend. He was also a member of the Masons, the Scottish Rite and the Shriners.

Because of current COVID restrictions, cremation has taken place and there will not be any services at this time. Arrangements have been entrusted to Halbritter Wickens 615 E. Main St. Niles.

Memorials in Wayne’s name may be made to Michigan Masonic Charitable Organization 1200 Wright Ave. Alma, MI 48801 or at michiganmasons.org/foundation/donate/

Online condolences and messages to the family may be made at halbritterwickens.com.