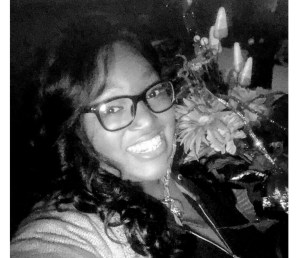 Azzaria, who was affectionately called Sunshine by her mother and Pookie by her father, was born on Aug. 24, 1989, to Ethyl M. Franklin and Rickie N. Gunn. Azzaria accepted Christ at an early age and was baptized at the Mt. Olive Missionary Baptist Church under the leadership of Rev. Fletcher McAfee where she continued her membership.

She graduated from Niles High School in 2008 where she was an honor student and was very active in choir and theatre. Azzaria loved to sing; to say she had a beautiful voice is truly an understatement. Immediately after graduation Azzaria was afforded the opportunity to venture to California as a member of the Young Americans. She also attended Lake Michigan College where she received a certification in Photography. She was very adventurous with her photos as that was yet another passion she enjoyed. Many stunning selfies and photographs grace her social media pages showing off her amazing smile and various theatrical poses. Azzaria was a sweet, vibrant and loving woman. Her positive energy and humor could send smiles for miles across the faces of almost everyone who knew her.

Azzaria was employed by Lowe’s Home Improvement Center, in Niles, a place where her co-workers were her extended family.

A time of visitation will be from noon until 1 p.m. with funeral services beginning at 1 p.m. on Thursday, Nov. 19, 2020, at Brown Funeral Home. Due to the recent limit of 25 people at a time placed on funerals by the Michigan Department of Health and Human Services the family asks that anyone wishing to visit or see Azzaria one last time do so during the visitation where people will be able to walk through to pay their last respects while socially distant.