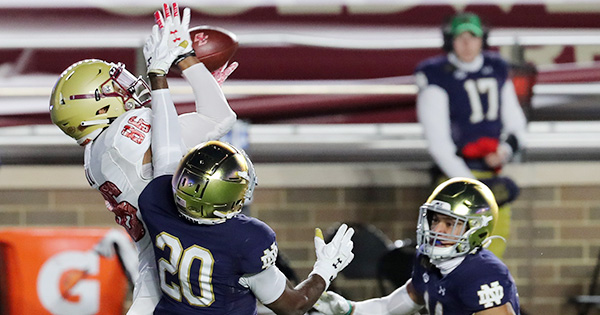 Crawford, Kraemer Tabbed for ACC Player of the Week Honors

NOTRE DAME, Ind. — University of Notre Dame graduate student safety Shaun Crawford was selected as ACC Defensive Back of the Week, and graduate student offensive lineman Tommy Kraemer was tabbed as ACC Offensive Lineman of the Week for their performances in the 45-31 win over Boston College last week.

It marks the first ACC weekly honor for both players. Overall, the Irish have won 11 ACC weekly awards. Crawford is the first Irish player to win ACC Defensive Back of the Week, while Kraemer’s selection makes him the fourth out of Notre Dame’s five starting offensive lineman to win the award this season.

Crawford started as safety at Boston College and posted nine tackles (five solo), 1.0 sack (-8 yards) and 1.5 tackles for loss (-9 yards) on the day. He was the only defensive back in the ACC this weekend to post at least nine tackles and a sack. Just two defensive backs in the conference posted more tackles than Crawford’s nine on the weekend.

Crawford led the team in tackles for the day, also notching a sack on Boston College’s opening drive, his second of the season and bringing his career total to 3.5. He was part of a defense that limited Phil Jurkovec to a 45.0 percent completion rate (18-of-40), when Jurkovec entered the day with a 62.1 completion rate for the season.

Kraemer started for an offensive line that paved the way for 561 yards of total offense (278 rushing with three touchdowns, 283 passing with three touchdowns), allowing zero sacks in the win at Boston College. Boston College entered the game allowing 373.0 yards of offense per game. Through the first half alone, the Irish racked up 327 yards, and ended the day with 561 yards.

Notre Dame’s 561 yards of offense at Boston College were the most this season for Notre Dame, and the most by an Irish team since their 573 vs. Bowling Green in 2019. It is the most Notre Dame has racked up on the road since their 584 against Navy in 2018.

The offensive line allowed zero sacks on the day facing a Boston College defense that entered the day averaging 2.75 sacks per game on opposing quarterbacks.

With the win over the Eagles following the 47-40 defeat of then-No. 1 Clemson, the Irish have scored 45 or more points in two-consecutive games for the first time since 1996 (vs. Pitt 60-6, vs. Rutgers 62-0). Entering Saturday, Boston College’s scoring defense ranked fourth in the ACC, allowing 24.6 yards per game. Notre Dame surpassed that mark in the first half alone with 31 points in the first 30 minutes.

Notre Dame continues to lead the ACC in third-down conversions, executing successfully at a 54.1 percent rate.

Sept. 14: Kyren Williams, Running Back of the Week (Duke)

Nov. 9: Kyren Williams, Running Back of the Week; Aaron Banks, Offensive Lineman of the Week; Jeremiah Owusu-Koramoah, Linebacker of the Week (Clemson)

NILES — The goal for the Michigan High School Athletic Association for 2020-21 was to have three complete sports seasons.... read more