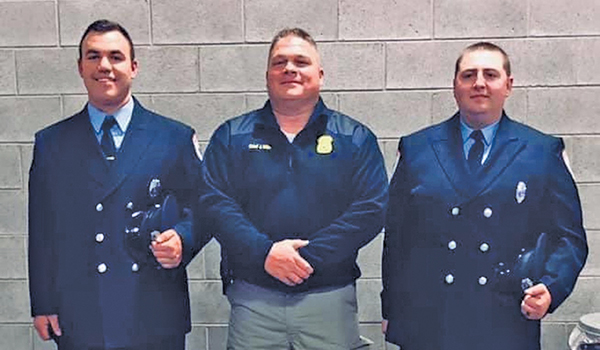 NILES — On Monday evening at the Niles City Council meeting, Tyler Fisher and Evan Albers were sworn in to the Niles Fire Department by Clerk Linda Casperson and Public Safety Director Jim Millin.

The firefighters took their oaths facing Casperson in the Niles Utilities Service building, where the city council meetings are currently hosted, in addition to an online viewing setup.

“The oath gives them an ownership of their duties,” Millin said.

He also said it makes the ceremony official as they begin their positions as drivers with the department.

Albers and Fisher are now full-time firefighters with the department.

According to Millin, they were both part of the department’s on-call force, where they received a small stipend and would be alerted by a pager to an emergency to respond when they could.

“A lot of the on-call [firefighters] here have part-time jobs,” Millin said. “Just like the police reserve program, many go into the on-call force to get into full-time firefighting.”

Millin said there were six candidates for the two full-time openings. Albers and Fisher were the two that rose to the top.

Firefighters must complete Firefighter 1 and 2 training, which Millin said comes down to about 300 hours, completed mostly on Saturdays.

Albers said firefighting was something he had wanted to do since he was a child. He has worked on-call and volunteer with a department in Berrien Springs. He also worked as a full-time paramedic with Southwest Michigan Community Ambulance Service. Transitioning to the Niles Fire Department full-time will bring Albers closer to home and in his own community.

“It’s always been my goal,” he said. “My father was a police officer, and both of my parents were in the military. This was my way of serving.”

His father worked with the Berrien County Sheriff’s Office.

The comradery is something Albers really enjoys about working in the fire department.

“There’s a family aspect to it. The fact that we live together for 24 hours at a time, between here and behind at home, we split our time evenly,” Albers said. “A good half of the year is spent with your work family, and half is spent with your family. It’s nice to be able to work with people we care about and spend time with.”

BERRIEN COUNTY — Based on the current spread of COVID-19 throughout the U.S. and the region, Berrien County announced today... read more