Lewis Kenneth “Whitey” Voss Sr., 89, husband, father, grandfather, honorable veteran and carpenter died peacefully Saturday morning, Nov. 7, 2020, with his family around at his home in Niles, following a brief illness. His family is grateful for the compassionate care offered by the hospice staff.

He was born on Oct. 9, 1931, in South Bend, to Fred and Ruth (Williams) Voss and attended South Bend Riley High School. He answered the call to service of the U.S. Army, served most of his tour of duty in Korea and was honorably discharged as a Veteran of the Korean Conflict. When he returned home, he began working as a carpenter and was employed by Campbell/Mannix, Inc. most of his career, working on commercial office and franchise restaurant construction projects. He moved to Niles in 1964, and eventually designed and built a remarkable home for his family. While working outside his hair would be sun-bleached totally white, leading his co-workers to refer to him as “Whitey.” 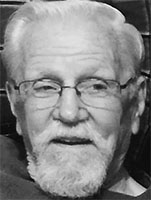 He was a life member of American Legion Post #26 in Niles, Niles Moose Lodge 978, Fraternal Order of Eagles Niles Aeries 2094 and the former Niles posts of the Veterans of Foreign Wars and Disabled American Veterans.

He enjoyed traveling through the U.S., usually to construction projects for his employer. He had an uncanny ability for driving directly to a construction site for the first time, but was far less successful at locating the special interest venues which his wife wished to visit. He also enjoyed designing and maintaining the yard around their home.

On Aug. 31, 1969, in Niles, he married the former Barbara Ann Gibbs with whom he celebrated a few months ago the remarkable 51st anniversary of their wedding. They were sadly preceded in death by a son, Lewis “Kenny” Voss Jr., in a 1982 traffic accident; and by a daughter, Beth Ann Hernandez, and an “extra” son, Rhett Martin. Whitey was also preceded in death by his parents; and by six siblings, Fred (Billy) Voss Jr., Robert Voss, Max Voss, Betty Toombs, Margaret Ringle and Delores Weinberg

Surviving family includes his wife, Barbara Voss; and children, Robert A. Voss and Richard Lee Voss, both of South Bend, Kathy Nikodem, Gregory Nikodem and Michael Wade Nikodem, all of Niles, Scott (Christine) Nikodem, of Fredericksburg, Virginia, and Darryl (Renee) Voss, of Cicero, Indiana; 18 grandchildren, and 30 great-grandchildren; and Whitey’s sister, Barbara Addison, of South Bend, and many nieces and nephews.

The graveside service for Lewis K. Voss Sr. will be at 2 p.m. on Thursday, Nov. 12, 2020, at the Silverbrook Cemetery, 1400 E. Main St., in Niles. The ceremony will include Full Military Honors by the U.S. Army Honor Guard. Those who prefer to witness the ceremony via the livestreamed broadcast may do so on the Halbritter-Wickens Facebook page: facebook.com/halbritterwickensfuneralservices.

The family received relatives and friends from 6 until 8 p.m. on Wednesday, Veteran’s Day, at the Halbritter-Wickens Funeral Home, 615 E. Main St., in Niles. Contributions in memory of Mr. Voss may be made to the City of Niles Veterans Memorial, 333 N. Second St., Niles, MI 49120; cms3.revize.com/revize/niles/document_center/Forms/Department%20of%20Public%20Works/BuyABrickForm16.pdf.

Online condolences may be left at: halbritterwickens.com.

Whitey had earned the right to be proud of his military service, of the buildings on which he worked and of the design and successful execution of the radius corners of his house. But most important was the love of his children, grandchildren and his wife.

Phyllis Jean (McGregor) peacefully passed away after her favorite meal of the day, breakfast with apple butter toast. Her fully... read more