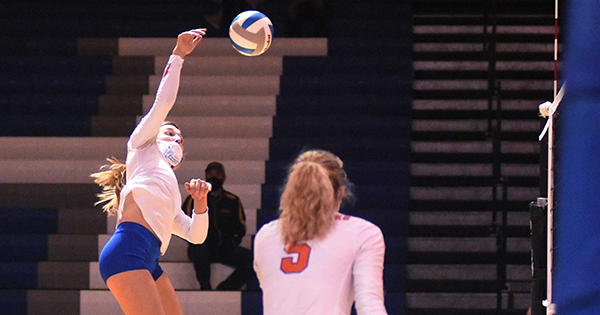 Eddies get past nemesis to reach the finals

BATTLE CREEK — The king is dead.

For the past two years, Edwardsburg has had its run for a state volleyball championship ended in the Division 2 regional round by the Hamilton Hawkeyes. In both matches, Hamilton edged the Eddies 3-2 for the championship.

The third time was the charm for Edwardsburg as the Eddies swept by the Hawkeyes 25-13, 25-16 and 25-17 in the regional semifinal match at Battle Creek Harper Creek High School Tuesday night.

The win advances the Eddies to the regional finals, where they will face the host Beavers for the title at 6 p.m. Thursday. The winner moves on to the Division 2 state quarterfinals at Three Rivers on Nov. 17. They will face the winner of the Grand Rapids Christian Regional. Host Christian is facing Hudsonville Unity Christian for the championship Thursday night.

“That felt good,” said a smiling Edwardsburg coach Nikki Bush. “The girls were focused. That was their beast. That was the team they knew, walking into the season, that they were going to have to get ready mentally to play. The girls worked hard. They earned it.”

Edwardsburg (18-7) set the tone early against the Hawkeyes (25-6) as it took advantage of numerous hitting errors by Hamilton, which has just two seniors listed on its roster.

After trailing the Hawkeyes 2-1 in the opening set, it was all Eddies from that point on. Edwardsburg won 12 of the next 21 points to take a 13-7 lead, which forced Hamilton into calling a time out. The Eddies continued to pour it on after the time out, opening up a 20-11 lead to force another break in the action.

Hamilton would score only two more points in the set, falling 25-13.

In the second set, it was much of the same for Edwardsburg. Another quick start gave the Eddies a 17-10 lead. Hamilton’s three consecutive points would make it 18-13, but that would be as close as they would get. Edwardsburg went on to win 25-16 to make it 2-0.

Hamilton came out with a sense of urgency in the third set as it was facing elimination. The Hawkeyes led 4-0, but were unable to maintain that momentum. Edwardsburg caught Hamilton at 9-9, and scored the next five points to take charge. Hamilton never threatened again as the Eddies went on to the sweep.

The match was a battle of frontline performers. For the past two years, Hamilton turned to senior AJ Ediger, who will play basketball at Iowa next season, to lead them to victory. She was the lone senior on the floor for the Hawkeyes, as Megan VanderKool was sidelined with an injury. Ediger finished with 14 kills, 12 digs and three blocks.

Edwardsburg countered with its front line of Sophie Overmyer, Macey Laubach and Paige Miller. That trio combined for 28 kills, led by Overmyer’s 12.

Defensively, the Eddies were led by Brooklyn Broadway’s 12 digs. Setter Emma Strefling, who was a key factor in winning the match, had 27 assists to go along with nine digs.

Because she does not have a lot of information on Harper Creek, Bush wished that the win over Hamilton would have been for the regional championship, like in their previous two meetings.

“I liked it when it was a regional final more,” she said. “We haven’t seen South Haven or Harper Creek this season, so we do not know what to expect from them.”