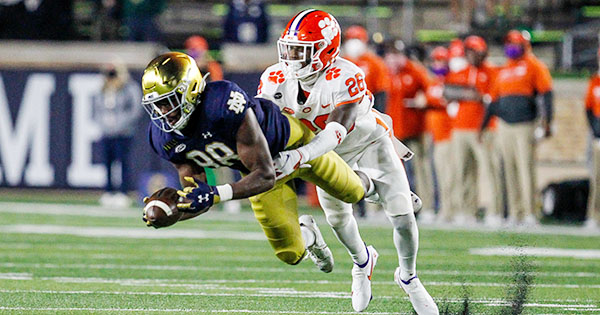 Notre Dame's Javon McKinley makes a diving catch in the second half of No. 4 Notre Dame and No. 1 Clemson in Notre Dame Stadium. (Photo courtesy Atlantic Coast Conference)

The No. 4-ranked Fighting Irish upset No. 1 Clemson 47-40 in a double-overtime thriller that felt very much like a national championship game.

The win is the program’s first over a top-ranked opponent since a 31-24 win over Florida State in 1993. It puts Notre Dame (7-0, 6-0) in poll position for not only its first-ever conference championship but its first national championship since 1988.

Clemson took the lead in the first overtime with a 1-yard Uigalelei touchdown run, but Notre Dame punched in a 3-yard Kyren Williams touchdown run to move to double overtime.

The Irish started the second overtime with a Williams touchdown and back-to-back sacks from the Notre Dame defense stymied the Clemson offense as the defense went on to force a game-winning four-and-out.

“It was so fun,” Book said. “It was a night that I’ll never forget, no matter how old I am. It was a special moment, and watching the defense stop them was unbelievable.”

Book completed 22 of 39 passes for 310 yards and one touchdown pass and added 64 yards and 14 carries on the ground.

Javon McKinley tallied five catches for 102 yards and one touchdown and tight end Michael Mayer had five for 67, while Avery Davis added four for 78 and a touchdown catch. Drew White’s nine tackles paced the defense while Michigan native Daelin Hayes added a sack.

After fumbling away a would-be touchdown run in the second half, Book was able to remain focused and put the offense in a position to win the game.

“Things happen,” Book said. “Playmakers forget about it. I just told myself if I just keep thinking about this, I’m probably going to have a worse game.”

Seeing the fans storm the field was a surreal experience for Williams, who finished with three touchdowns and 140 yards on 23 carries, including a 65-yard touchdown run on the game’s second play.

“That’s the first time I’ve seen high school or college fans storm a field,” Williams said. “That was a cool experience for me.”

According to Kelly, he instructed players that fans would storm the field, not if the team would win, but when.

“Everybody was rushing down to get on the field,” Williams said. “But Coach Kelly told us before the game that it was going to happen, so he told us to get inside as soon as it ended.”

“You might as well call coach Kelly a prophet,” said linebacker Jeremiah Owusu, who forced two fumbles and recovered one of them for a touchdown. “It’s something that you expect with our great fans and our great community around us. He told us to get out of there, which was kind of hard.”

In a game that featured more swings than a pendulum, the Fighting Irish proved their mettle on the biggest of stages.

After taking a 23-13 lead into halftime, Notre Dame saw its lead evaporate as quarterback DJ Uigalelei and the Clemson offense rallied to take the lead on a 3-yard touchdown run from running back Travis Etienne.

But Book and the Fighting Irish responded, with Book finding Avery Davis for a 4-yard touchdown pass to tie the game and force overtime.

“It’s just resilience,” Davis said. “You can’t let a bad play ruin your day. I knew I would have the opportunity to make that play.

A true freshman, Uigalelei looked anything but Saturday night, filling in for an absent Trevor Lawrence by completing 29 of 44 passes for 439 and two touchdown passes. Amari Rogers caught 8 passes for 134 yards and Cornell Powell tallied 6 for 161 and a score, while Davis Allen added 2 for 19 and a score.

Etienne was held to 85 combined rushing and receiving yards on 26 touches.

“We put a lot of emphasis on [Etienne] not wrecking the game,” Kelly said. “DJ is a special player. Trevor Lawrence is as well. He is outstanding. His ability to throw the football was really special. If we played them again, we’d have to do a few things differently because he’s so explosive at QB.”

The win moves Notre Dame into first place in the ACC as the program figures to move to No. 1 in the polls.

A Clemson rematch in the ACC Championship game remains likely, but Kelly and his Fighting Irish aimed to celebrate Saturday and move on to next week’s game against Boston College (5-3, 4-3).