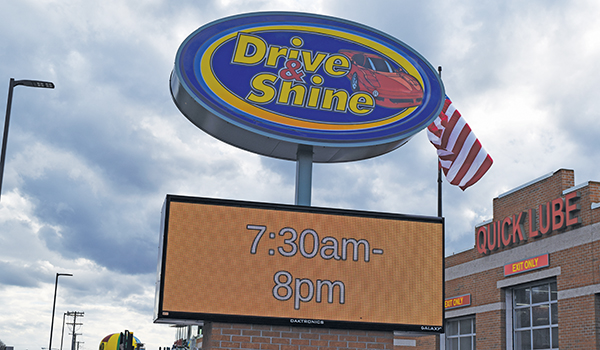 NILES — Vehicles lined up at Drive and Shine’s newest location in Niles on Friday to take advantage of a free carwash promotion. The vehicles in line signaled to those passing by the location was open for business after months of construction.

Haji Tehrani, owner of the business, said he is pleased with the buildout and the location of the latest carwash. The buildout bears the signature brick and green glass used in the company’s other locations, to stand apart and keep the image as fresh as the vehicles exiting the carwash itself.

“I have a passion for the business,” Tehrani said.

Free carwashes were offered over the weekend to customers stopping into the new carwash and service center. The staff and owner of the Drive and Shine location took notes, and dialed in the carwash’s settings to work out any quality concerns with the new carwash system as it moves forward.

Vehicles with structural concerns, such as loose rust, were turned away from the wash due to the fact the carwash’s mechanisms could catch the rust flakes off of the car, according to Tehrani. The concern was important to Tehrani both for the vehicle owner and for vehicles that would come through after them.

The Drive and Shine location opened over the weekend at 518 S. 11th St. The site was approved in February by the city for the new business to develop the former Schillings Carwash, citing a $6 million investment for the development.

Choosing Niles as the next location for a carwash was easy.

“I think city’s the size of Niles are often, mistakenly, overlooked by growing businesses,” Tehrani said.

He noted the welcoming nature of the community, as well as the fact that everyone travels in their cars in the community.

Tehrani is excited about the carwash industry. As a former chief executive officer in the International Carwash Association, he has traveled internationally to observe how other countries have developed their carwashes.

“I have visited Germany and the Netherlands to research and observe,” Tehrani said.

One of the innovations Tehrani said he brought back with him was the indoor spaces to vacuum one’s car out.

The area is branded with the signature green glass and will be reserved for Drive and Shine customers to use with monthly memberships. Tehrani is excited to offer the indoor car cleaning bays, in a climate-controlled environment, where customers can continue to care for their vehicles through the hottest and coldest months, comfortably.

Tehrani said two more Drive and Shine carwashes are in the works in the surrounding areas, including one in South Bend and another in Kalamazoo. Three now have the indoor areas, making Niles the third location to receive the upgrade in its development.

SOUTHWEST MICHIGAN — COVID-19 cases rose over the weekend, according to the Michigan Department of Health and Human Services. As... read more