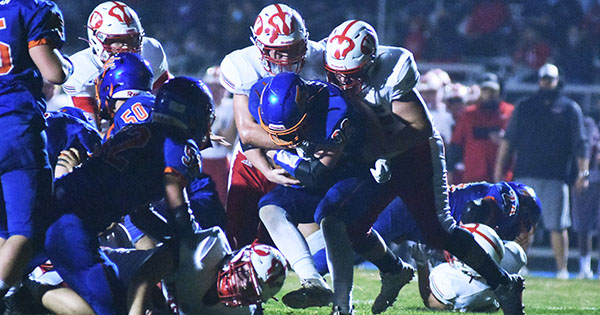 Eddies score early and often in 55-7 win over Vicksburg

EDWARDSBURG — To the untrained eye, it may have looked like the Edwardsburg football team was firing on all cylinders right from the outset of its 55-7 Division 4 District semifinal victory over visiting Vicksburg Friday night.

But according to Eddies Head Coach Kevin Bartz, his team showed signs of being a bit rusty after having received a bye in the first round of the state playoffs.

“We didn’t play that well,” Bartz said. “They are a lot better team than the first time we played them and [Jacob] Conklin is a heckuva quarterback. If you give him enough time, he is going to find receivers. Defensively, we bent a lot, but we didn’t break. We didn’t let him get outside and run wild and we didn’t give him the deep ball.”

If Friday’s performance was “rusty,” future opponents facing the Eddies, including Paw Paw this Friday in the district title game, had better prepare themselves.

It might be hard for the fans in the stands to understand what Bartz is saying, after all, on just the second play from scrimmage, the Eddies’ Ethan Cebra went 73 yards for a touchdown. On Edwardsburg’s next possession, Jackson Hoover scored from 34 yards out after the Eddies got a short field after holding the Bulldogs to a three-and-out.

The lead would increase to 24-0 in the second quarter before Vicksburg averted the shutout on a 2-yard run by Conklin. It would be the only time the Bulldogs would seriously threaten to score against the Edwardsburg defense, which limited it to 218 yards of total offense.

“We score our first couple and shut them down and get ourselves that 14- to 16-point lead. It makes it tough on other teams,” Bartz said.

Cebra and Gavin Houser led the Eddies on defense with 7.5 tackles each. Brett Allen had seven tackles. Hoover picked off a Conklin pass for the game’s only turnover.

While the Edwardsburg defense was doing its job, the offense kept racking up the yards and finished the night with 455 yards, all of which came on the ground.

Edwardsburg will host Paw Paw at Leo Hoffman Field at 7 p.m. Friday for the district championship.

BUCHANAN — Connor LeGault and the Buchanan offense had its way with the Brandywine defense in the Division 6 District... read more