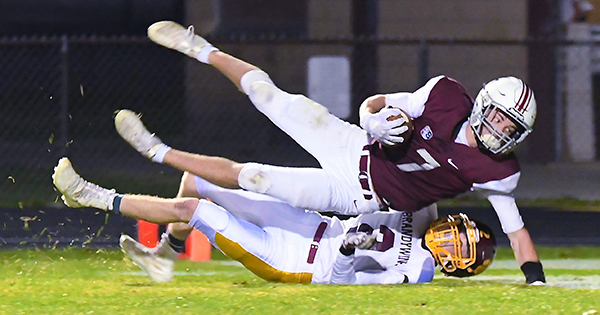 BUCHANAN — Connor LeGault and the Buchanan offense had its way with the Brandywine defense in the Division 6 District Semifinal Friday night.

The Bucks totaled 397 yards of total offense en route to a 55-15 win to keep their undefeated season intact.

Buchanan (8-0) marched right down the field on its opening possession, but could not grab the early lead as a Logan Grwinski’s 44-yard field goal attempt was short.

Following a Bobcat three-and-out and a 17-yard punt, LeGault’s first pass of the ensuing drive found the hands of Gavin Fazi on a post route, which 32 yards later, found him in the end zone and the Bucks had the lead they would not relinquish.

LeGault connected with Fazi on another 32-yard touchdown pass in the second quarter and a 41-yard touchdown pass to Darius Griggs. Keeghan Pelley (42 yards), Izayah Burns (7 yards), and Johnny Rager (1 yard) all had rushing scores as well in the quarter to break the game wide open.

Offensively, the Bucks nearly doubled the Bobcats, 397-209 in the contest.

“They were definitely the hammer, and we were the nail,” said Brandywine Coach Mike Nate. “We could not do anything against their [Buchanan’s] defense tonight. They had an excellent game plan and took it seriously. They deserve their No. 6 ranking in Division 6, and it’s going to be their defense that takes them far into the playoffs.”

“We are doing a phenomenal job on defense,” said Buchanan Head Coach Mark Frey. “Our front seven is doing an amazing job, which makes it easier on our defensive backs. Overall, we had a very solid unit. Our varsity unit has only given up two touchdowns all year.”

LeGault bounced back from his performance at Brandywine two weeks ago when he had three interceptions. He finished the game with 13-of-21 passes for 219 yards and three touchdowns.

“He [Connor] is a sophomore and sneaky,” Frey said about LeGault’s play against the Bobcats.  “He is learning so much so quickly, and we are very excited about his progress. He continues to spread the ball around with the amount of weapons we have offensively.”

The Buchanan ground game continued their dominance of the Brandywine front line, outrushing the Bobcats 178-101 and finishing with five touchdowns. Burns would pick up his second touchdown of the game and Aiden Kutemeier scored on his only carry in the fourth quarter.

Buchanan had 20 first downs compared to Brandywine’s nine. The Bucks were also 5-of-9 on third downs and 2-of-3 on fourth down, while the Bobcats were 1-of-11 and 1-of-2, respectively.

Brandywine’s best quarter came in the third as Gabe Gouin connected on an 18-yard pass to Hunter Heath to cut the deficit to 42-8. Gouin would finish with 8-of-20 passes for 108 yards, one touchdown, and two interceptions. He added eight rushes for four yards.

A two-year starter at quarterback for the Bobcats, Gouin will be missed next year on the gridiron as he graduates in May.

“Gouin is the glue to this team,” Nate said. “He has been a winner for us, and that showed in our undefeated regular season last year. He is a top-notch kid that works hard, and he helped us win our first-ever playoff game last week against Comstock.”

EDWARDSBURG — The host teams cut their visitors no slack in the second round of the Michigan High School Athletic... read more