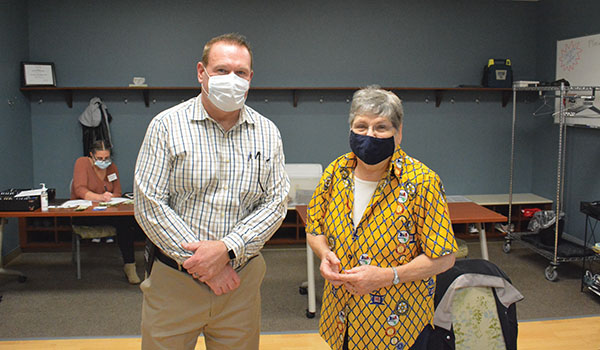 Springsteen was on hand Thursday to talk about the real estate market in and around Dowagiac and how it is changing over the years.

Springsteen presented the club with a bevy of information about the real estate scene, including the reveal that 236 units were closed in 2020 so far, an increase from last year’s 214. According to Springsteen, the volume, or sum of the sales prices of all transacted homes during a given period, is more than $47 million this year, $12 million more than last year’s total.

“That went up 36 percent,” Springsteen said. “I think there’s a big difference with Sister Lakes because that’s an area where the prices are high.”

“It doesn’t go up the same percentage as volume because there are different sized houses every year,” Springsteen said. “The weird thing is the ‘days on the market’ went up, which is not a good thing. That means houses on average sat on the market for a long time.”

Rotarian and Sandhill Crane All Trail Races coordinator Ron Gunn was on hand to present Rotary president Bob Cochrane with a $1,500 check. The check from Gunn is money generated from race proceeds.

Directed by Gunn, the races included a half-marathon, a 10K run and walk, a 5K run and walk and a 1K kids’ fun run. A record number of 338 people registered for this event, including people from Michiana and beyond. One-hundred-fourteen Rotarians volunteered to assist with the event.

“Thank you to all of our volunteers,” Gunn said. “I think it was orchestrated very well, and we did it during a pandemic. The Cass County Health Department and the Cass County Parks Director were very complimentary of how we pulled that off and kept everybody safe. It took some extra effort from you guys to do that and I appreciate it.”

Cochrane announced that the club will be conducting hybrid meetings on a trial basis beginning next week, which will allow members who either cannot attend due to illness or are uncomfortable attending in-person meetings the chance to attend meetings via live stream.

“We’re hoping to try the hybrid approach to meetings between now and the end of the calendar year,” Cochrane said. “We’re going to experiment with that and then Dec. 17 we’ll decide whether to continue that or not.”

NILES — The first round of the Michigan High School Athletic Association state volleyball tournament is in the books. Edwardsburg... read more