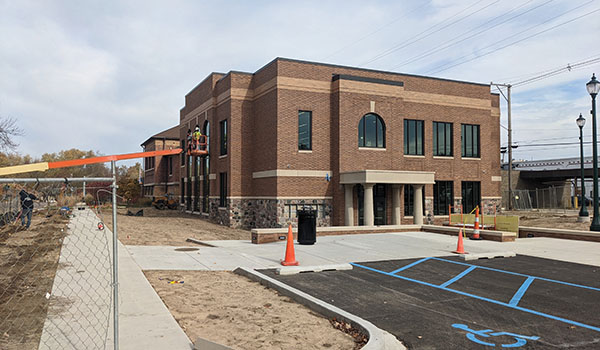 Dowagiac District Library gearing up for opening of new building

DOWAGIAC — The Dowagiac District Library will be bustling during the month of November.

According to library director Matt Weston, construction on the new library wing is wrapping up, with the library planning to move equipment into the new wing Monday, Nov. 16.

The library will be closed that week as well as the week of Thanksgiving.

“We were hoping to make moving an event for the community, pre-COVID, but decided to keep it with staff only for safety reasons,” Weston said.

Mulder’s Moving, of Kalamazoo, will be relocating the library’s large temporary shelving into the community room of the new building to hold the books that cannot stay in the areas of renovation, Weston said. Those books will be moved back into the old section some time in February when the renovations are complete. Other shelving will be going into the basement, where the library plans to develop a “library of things,” such as tools and educational kits, that can be lent out to the public.

Weston said that most of the week before Thanksgiving will involve staff moving the books over with equipment lent to the library by the moving company, and the following week will be spent organizing office supplies and other equipment. The contractors will also be training staff on the operation of the new building before opening to the public.

“There will be pizza involved, I’m sure, in order to keep up staff morale and replace all those spent calories,” Weston said.

The Library Board is meeting Tuesday, Nov. 10 to decide the reopening day. Weston said the board will choose between Monday, Nov. 30 or Tuesday, Dec. 1. After the bulk of the move is done, Weston hopes to give tours before the reopening.

“I’m excited to start the moving process and have us get acquainted with the new building before opening to the public,” Weston said. “Once we’re open again, it will be fun to bring the patrons around on tours of what will be new to us as well. It will also be a thrill to watch the demolition crew get to work on the old front, starting Nov. 23, and to see the old building get a facelift before opening fully sometime in February.”

In other library news, Weston noted that the library has two book groups for adults that have been meeting in-person: the DOA book club, a club that focuses on popular titles, meets at 6 p.m. every first Tuesday, and a classics book group called The Great Conversation, which meets every fourth Tuesday. Both clubs are masked up and socially distanced.

DOWAGIAC — It has been a busy year for the Dowagiac Fire Department. On Oct. 27, the department set the... read more