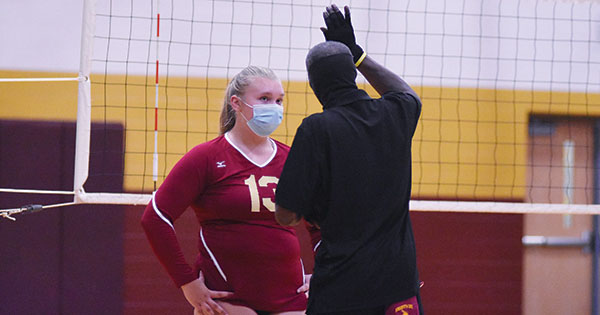 WATERVLIET — A lack of court time did not seem to hurt the Brandywine volleyball team in its sweep of Hartford in the Division 3 District opener at Watervliet High School Monday night.

Due to COVID-19 related issues, the Bobcats had several matches canceled, including its chance to participate in the BCS Athletic Conference Red Division Tournament.

With a pair of JV players, Brandywine advanced to tonight’s district semifinal against former BCS foe Cassopolis with a 25-12, 25-18 and 25-14 win over the Indians.

“Thanks to the wonderful help from two JV players that got moved up [Mari Allen and Cortney Bates] and the talent from our freshman setter [Ellie Knapp], we were able to be victorious,” said Brandywine coach Ray Prestley. “This was our first game back on the court since Oct. 14.

“To watch these young ladies come together and play with great heart would be an understatement. I am truly blessed and honored for all the hard work and dedication they have shown this year.”

Veterans Kristen Alvord and Haley Scott helped carry the load for the Bobcats. Alvord finished the match with 17 kills and an ace, while Scott had four kills, three blocks and eight aces.

The Bobcats and Rangers will play in the first semifinal at 5:30 p.m. Wednesday. The second semifinal pits Bridgman against district host Watervliet.

Prestley was glad that his team, as well as others around the state, are able to complete their season on the court.

“This has been a tough season for all teams due to COVID-19 and the restrictions these young athletes followed to get to this point,” he said. “My hat goes off to all our 2020 volleyball athletes and coaches.”

The winners will advance to play for the championship at 5 p.m. on Thursday.

DOWAGIAC — Just as The New York Sun editorial in 1897 proclaimed, “Yes, Virginia there is a Santa Claus,” despite... read more