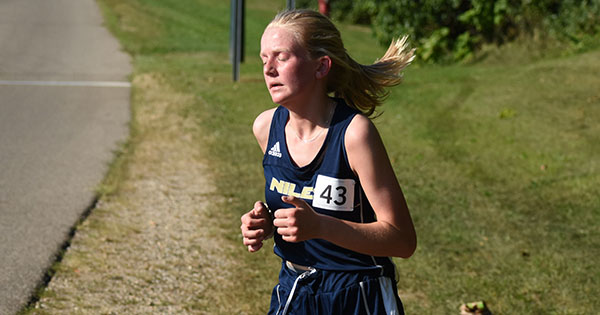 NIles’ Eva Shephard finished 15th at the Division 2 Regional on Saturday to qualify for the state finals at Michigan International Speedway on Friday. (Leader file photo)

NILES — For a vast majority of the cross country runners, a short and strange season came to a close at the regionals hosted by Portage Central on Saturday.

The season will continue with one final race at Michigan International Speedway in Brooklyn this weekend for a select few.

Niles, which had qualified its girls team for last Saturday’s regional and Aiden Kruger for the boys team, advanced only one runner to the Division 2 Cross Country Final, which will be on Friday.

Eva Shepherd follows in the footsteps of her brother, Adam, a state qualifier last season. She also helped the Vikings finish sixth out of 15 teams at the regional on Saturday.

“She went into regional finals ranked 26th and placed 15th overall,” said veteran Niles coach Jami Roden. “She ran a great race and was determined to follow in her brother’s footsteps to make it to the state meet.”

The Division 2 championship race will begin at 3 p.m. at MIS.

Roden was happy with how her team adjusted to everything thrown at it due to the COVID-19 pandemic, which shut down sports in the state of Michigan in early March and the entire spring season.

It was not until early August that cross country, boys tennis and girls golf were given the green light to begin competition. Football, boys soccer and volleyball would follow several weeks later.

“Overall, it was a good season,” Roden said. “Many have been training since April. It’s been tough not having many meets [canceled due COVID-19] and training the entire time, but the girls continued to show perseverance throughout the season.”

Like Niles, Buchanan qualified its entire girls team for the regional final hosted by Portage Central.

The Bucks did not advance to the finals at MIS on Saturday, but did have Eleanor Young advance with a time of 20:33, which placed her 11th as an individual not on a qualifying team.

For the third straight year, Cassopolis’ Lauren Anderson will compete in the Division 4 state finals, which will be at MIS on Saturday.

A complete listing of area finishers can be found at Daily Data: Monday, Nov. 2 at leaderpub.com.