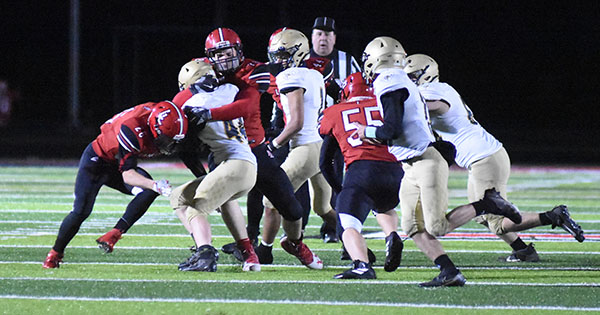 STEVENSVILLE — There were no treats for the Niles football team this Halloween weekend as the Vikings played in their first postseason football game since 2003.

Niles headed over to Stevensville Friday night to face former SMAC foe Lakeshore in the first-round of the Division 3 playoffs. It did not take long to figure out who would be advancing to the district title game this Friday night.

The Lancers (5-2) took Cade Vota’s opening kickoff and march down the field 64 yards in seven plays. Lakere needed just 2:51 to take a 7-0 lead when Aiden Jackson scored from 10-yards out and Tyler Gates tacked on the extra point.

Following a three-and-out, Lakeshore quickly made it 14-0 as it went 49 yards in six plays, capping the drive with a 2-yard Jackson run and Gates kick.

With a two-touchdown lead already on the scoreboard, the Lancers’ defense would make sure that Niles did not entertain any thoughts of making a comeback.

The Vikings (1-6) never cross midfield in the opening half. By the time they did in the third quarter, they trailed Lakeshore 37-0 and the game was being played under a running clock.

Niles was able to avert the shutout as the Vikings used a short, six-play drive that covered 41 yards to make it 37-6 with 4:17 to play in the third quarter.

The big play in the drive, which originated on the Lancers’ 41-yard line, was a 42-yard pass from Talon Brawley to Nick Berry. After Brawley tried to get in from the one, Alex Cole finished the drive with a 1-yard run.

Jackson ended the night with 81 yards on six carries, three of which resulted in touchdowns. Riley Adams, Brock Strebeck and Davison also scored on touchdown runs.

Five different Lakeshore players through passes in the contest as the Lancers went 7-of-12 for 112 yards.

Cole led Niles with 16 yards on 11 carries. No other Viking running back reached double figures.
Brawley was 2-for-6 for 42 yards passing.

Lakeshore amassed 356 yards of total offense, while holding a Niles team that has struggled all season on that side of the football to just 33 yards.