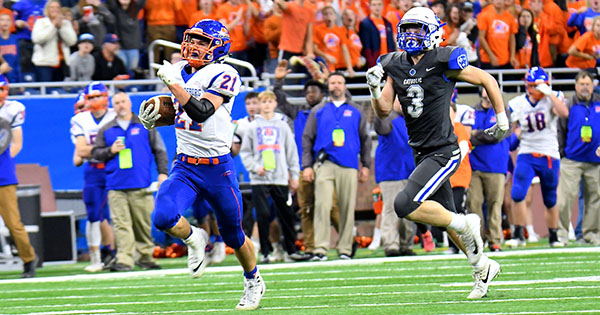 EAST LANSING — The longest rushing play in the MHSAA Football Finals is the only mark that has two players tied for the top spot.

Nick Williams of Farmington Hills Harrison originally set the standard in 1994, in the Class A Final against Grand Rapids Forest Hills Central, a game won by the Hawks, 17-13.

It took 27 years for the equalizer, when Edwardsburg’s Nick Bradley ripped off a 90-yard scoring run in the Division 4 finale against Grand Rapids Catholic Central, a game in which the Eddies fell to the Cougars, 42-31.

Williams, at 6-foot-2 and 248 pounds, blasted from his fullback’s spot through a hole and went untouched to start the second quarter for the Hawks against Forest Hills Central. Roy Granger followed-up with an 80-yard scoring run in the third quarter to stake coach John Herrington’s team to a 14-0 lead.

Bradley’s 90-yarder was one of two championship game records set in 2017 — the only time that has happened. Caden Coggins had a 99-yard kickoff return for a score in the same game. Bradley’s TD cut the Cougars’ lead to 35-31 with just over eight minutes left to play.

It was a wild game in the respect that Edwardsburg had five scoring plays in excess of 50 yards, but in the end, it was Nolan Fugate, rushing for four touchdowns, who gave CC the victory. Fugate caught a pass for a record-tying fifth touchdown in the game and had 306 yards rushing — one yard short of a Finals game record.

(John Johnson is the MHSAA director of broadcast properties.)

STEVENSVILLE — There were no treats for the Niles football team this Halloween weekend as the Vikings played in their... read more