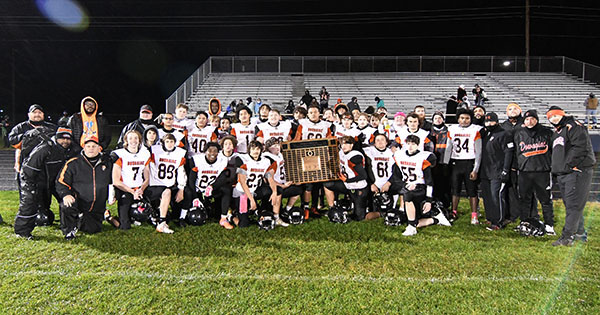 The Dowagiac football team will keep the Black & Blue Rivalry trophy for another year following its 20-0 win over the Vikings Friday night. (Leader photo/KELLY SWEENEY)

NILES — Two things are as sure and death and taxes. The Dowagiac football team will run the football and play good defense.

Both things were on display Friday night as the visiting Chieftains blanked Niles 20-0 to renew the Black & Blue Rivalry after a 13-year hiatus. Dowagiac finished the night with 309 yards of total offense, all on the ground, while the Chieftains held the Vikings to a total of 103 yards of offense.

Meeting for the 103rd time, but the first time since 2005 when Dowagiac joined the Wolverine Conference, the Vikings and Chieftains were similar in that neither team has an explosive offense, but play solid defense more often than not.

In fact, Dowagiac has thrown the ball just six times in six games without completing a pass and having two intercepted.

Second-year Dowagiac coach Randy Brooks, who is no stranger to the Dowagiac-Niles series, having previously been an assistant coach for the Chieftains during the rivalries’ heydays, is fine with grinding out the yards and chewing up big portions off the clock. Dowagiac rarely punts the ball and is willing to trust its defense in any situation.

“That is the key to high school football,” said Dowagiac coach Randy Brooks about the Chieftains’ philosophy. “They were pinching their defensive ends inside at first, and we didn’t adjust very well. We kind of got it figured out. The whole pile was getting moved down the field. That was good to see. That is exactly what we wanted to do. Be physical and get off the ball.”

The first half was a low-scoring affair, with neither team finding the end zone in the opening 12 minutes.

In the second quarter, Dowagiac started to push the Vikings around, picking up chunks of yardage as it marched toward it first touchdown ­— A David Collier 8-yard run with 54 seconds remaining in the first half.

From that point on, the Chieftains owned the line of scrimmage on both sides of the football.

Niles’ only real threat to score came early in the third quarter when they marched inside the Dowagiac 15-yard line, but turned the ball over on downs after a penalty backed it up to the 25-yard line.

The Chieftains (3-3) took advantage of the momentum it earned with the defensive stop to head the opposite direction, using six plays, and scoring on a 56-yard Malakai Haines run through the middle of the Vikings’ defense to make it 14-0 after Collier’s 2-point conversion run with 1:09 remaining in the third quarter.

Niles coach Joe Sassano and his squad were not surprised by anything that the Chieftains’ did.

“That is what they did, and we didn’t have an answer for it,” Sassano said about them running the football and playing tough defense. “We are just getting physically dominated upfront.”

Dowagiac would seal the victory with a 24-yard Haines run in the final quarter. The Chieftains’ win evened the series at 49-49-5. The Chieftains have won two straight in the series, and 13 out of the last 15 dating back to 1990.

Haines, who filled in at quarterback for Zane McPhail, rushed for 105 yards on 17 carries. Collier finished with 99 yards on 11 carriers, while Terrance Price and Brandan Lozano added 49 and 44 yards.

Colin Hess led the Vikings with 61 yards rushing on 13 carries. Talon Brawley was 2-of-5 passing for 19 yards.

Defensively the Chieftains, Wyatt Bailey had 8 1/2 tackles, while Brayan Paredes had six stops. Collier and Brandon Byrd both were credited with four tackles.