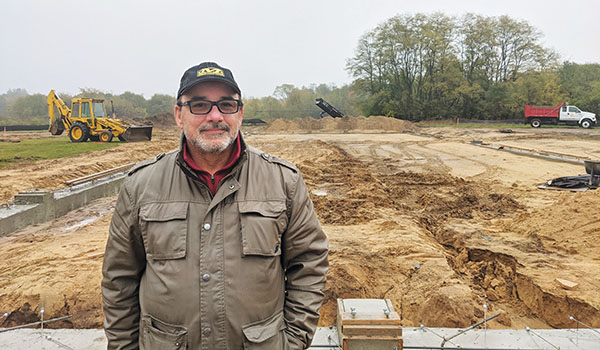 DOWAGIAC — Progress continues to be made on the construction of Dowagiac Municipal Airport’s six new T hangars.

According to airport manager Oscar Azevedo, construction crews have completed the foundation of the 147 feet by 58 feet city-owned structure, which will house six individual aircrafts. In total, the airport hosts 29 hangars.

“This airport is an asset,” Azevedo said. “It plays a big part in trying to attract business and tourists into town. There’s a fairly large demand for airspace and aircraft, which will generate revenue for the airport.”

The project, which was unanimously approved by the Dowagiac City Council in June, began on Aug. 11. Azevedo said cement work is currently underway, and the flooring should be finished next week, weather permitting.

Asphalt will be installed to provide access to the hangars and a prefabricated steel building structure will be delivered to the airport and attached to the foundation. The delivery is scheduled to happen in mid-November, but Azevedo expects the delivery to be a few weeks behind.

“Like any other project, there are delays with subcontractors and materials,” he said. “The initial deadline was mid-November but we expect to be pushed into December because of delays.”

Each hangar will be available to rent, though Azevedo added that the hangars have already been claimed by interested parties.

“They’re all spoken for,” he said. “They’re lake people who want a second home for their airplane. Most of them have nice aircraft, and they don’t want to keep them outside during weekends or vacations.”

According to Azevedo, the Dowagiac Municipal Airport was eligible for grant funds to assist with the construction of the six T hangars. Most of the project will be funded through federal and state financial resources.

“There is a minimal impact for this project,” he said. “The outlay of the financial burden to the city is basically gone, so we’re very lucky.”

With the construction of its new T hangars, the Dowagiac Municipal Airport continues to show its commitment to providing a quality airport experience, according to city officials.

Mayor Don Lyons referred to it as “one of the best municipal airports in the area.”

The facility opened its new 1,080 square-foot terminal in 2017, and was recently listed as one of six potential locations for a new space launch command center in Michigan.

“We’re very proud of this airport,” Azevedo said. “It’s very well-kept. Not many cities of our size have an airport of our size this close to town. Most airports are built on the outskirts in the boonies.”

Azevedo said while many municipalities similar in size to Dowagiac are getting rid of their airports due to financial reasons, he believes DMA will be around for years to come.

“Instead of spending money on an airport, these municipalities would rather make subdivisions out of them,” Azevedo said. “I don’t think we’ll ever get to that point. The mayor and the city council have been extremely supportive of the airport.”