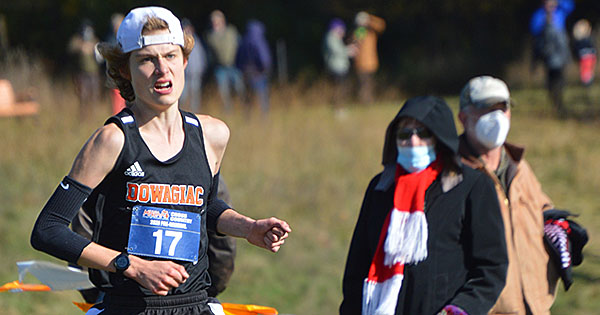 STURGIS — For the second straight year, Dowagiac had the first runner across the finish line at the Division 2 cross country meet.

In 2019, it was Shawn Little winning the Division 2 regional championship. On Saturday, Cole Parker ran a 16:12 to win the Division 2 Pre-Regional hosted by Sturgis on Saturday

Parker advances to the regional next Saturday hosted by Portage Central. He will not be the only Chieftain competing next week as Erin Beck finished 24th with a time of 22:41 and Laura Schaller finish 32nd with a time of 23:28 to advance.

“Cole had a great race on Saturday,” said Dowagiac coach Maria Kulka. “He’s running stronger this season and is currently ranked No. 2 for the regional meet this Saturday. As we all know though, rankings don’t always predict the outcome. As his coach, I think that he has a really good shot at winning regionals. We have a speed workout scheduled this week and then the focus is on recovery and cutting mileage.

“Cole is on the upswing right now and this Saturday is anybody’s race. I need him to sit back that first mile and then make his move. I predict that this Saturday will be a very close race and an exciting race to watch! Cole has put so much work in this season. It is truly inspiring to watch and I feel so humbled, as his coach, to take part on this awesome ride.”

Kulka is also pleased to be sending more than one runner to the regional as she tries to build the program.

“I am so proud of these girls,” she said. “They have had so much personal success this season. They have improved their 5k times by minutes and both ladies PR’d at Saturday’s meet. The main focus I had for the girls this season was for them to build their aerobic base. Erin and Laura have put in a lot of mileage this season and this is why they have had so much success. If we do things right this week, they will have another great race on Saturday.”

Edwardsburg advanced two runners to the boys regional as Will Leman finished 21st with a time of 18:56 and Daniel Guarino finished 26 with a time of 19:21 to take the first step toward qualifying for the state finals.

Berrien Springs captured the team title with 45 points, while Three Rivers was second with 49 and Coldwater third with 50.

Edwardsburg and Niles finished sixth and seventh with 151 and 168 points respectively.

“I was very pleased that our team was able to make it to the regional finals this year,” said Niles coach Jamie Roden. “Obviously, in the past there have been no pre-regionals but because of COVID our regionals split us into two groups.”

“The girls ran good races this weekend. Our No. 4,5,6, and 7 runners (Ansyley McIntosh, Lilly Jackson, Rachel Oltz and Meg Crites) ran their season PR’s [personal records} and because of them stepping up they helped us advance,” Roden said. “Kierstyn Thompson, Cassie Shortman and Eva Shepherd ran close to their season PR’s and ran competitively with the competition. All three placed in the top 14 out of more than 50 runners. They have been very consistent all year and all three have an opportunity to possibly advance to the state finals. They will have to run their career bests in order to do so.”
Edwardsburg advanced three runners to the girls regional as Macy Andress finished ninth with a time of 22:03, Abigail Hess finished 20th with a time of 23:11 and Claire Ritchey finished 25th with a time of 23:35.

Host Sturgis won the girls title with 37 points. Three Rivers was second with 71, Berrien Springs third with 73 and Niles fourth with 86. Edwardsburg just missed qualifying as a team by finishing fifth with 116 points.

BERRIEN SPRINGS — The Cassopolis Rangers will head into the postseason on a four-game losing streak after falling to host... read more