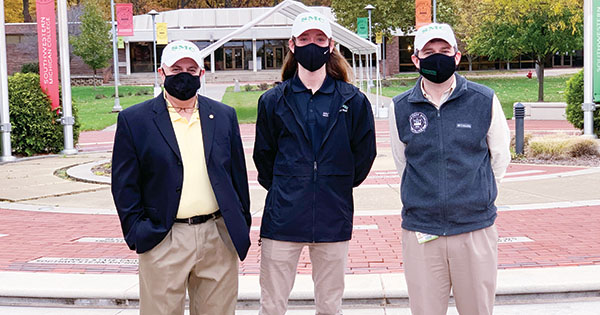 DOWAGIAC — On a day befitting the sport, Juris Silenieks, of Grand Rapids, was selected Friday to bring back the Southwestern Michigan College men’ and women’s cross country program.

SMC President Dr. Joe Odenwald and Board of Trustees Chairman Tom Jerdon, who hatched the idea of bringing back cross country to the college, also announced that on Thursday, the National Junior College Athletic Association approved SMC’s request to return to the NJCAA in cross country, beginning in the fall of 2021.

“The NJCAA welcomes Southwestern Michigan College to the association as their core values align with what the NJCAA stands for,” said Dr. Christopher Parker, NJCAA president and CEO. “We look forward to watching their student-athletes compete and succeed at the highest level of two-year collegiate athletics in the country.”

Silenieks has a championship pedigree. He attended Syracuse University and was a member of the Orangmen’s 2015 NCAA cross country national championship team. He also was an Olympic trials qualifier for the 2020 Tokyo Games, which were postponed due to COVID-19.

His coaching background started at Robert Morris University, a Division I school near Pittsburg, Pennsylvania, where he was the track and field distance coach. He was able to take the Colonial’s from a fifth-place team in the Northeast Conference to a third-place squad in just two seasons.

Odenwald said that it was Jerdon who put the Roadrunners back on track to return to competition.

“Tom Jerdon, who I have to say, had a vision when we started talking about cross country back in the spring and summer,” Odenwald said. “Today is proof that it just wasn’t indigestion. It was a vision.”

SMC dropped sports 25 years ago. Before stopping competition, the Roadrunners were among the nation’s top programs in both cross country and track. In cross country, SMC dominated the Michigan Community College Athletics Association, winning the championship 23 out 25 years, including a stretch of 11 consecutive seasons.

“I am happy to announce today that the National Junior College Athletic Association has approved our return to competition for 2021 for our legacy sport, cross country,” Jerdon said. “It is amazing what watching the move ‘McFarland USA’ a few times and having a conversation can bring about, but here we are. We are ready to recruit, train, and compete and win again. This just makes sense for the college at this time, as we continue to find ways to connect students to our excellent academic programs.

“Many students came here to run, earned their degree and became successful members of society because we had cross country. I am glad we were going to write more stories like those in years to come.”

“I am thrilled to be here and thrilled to get a great tradition restarted after 25 years,” Silenieks said. “I really look forward to helping create a great team in a large running community here. I am ready to get started. Go Roadrunners.”

A more in depth story, including Silenieks’ plans moving forward, can be found online at leaderpub.com.