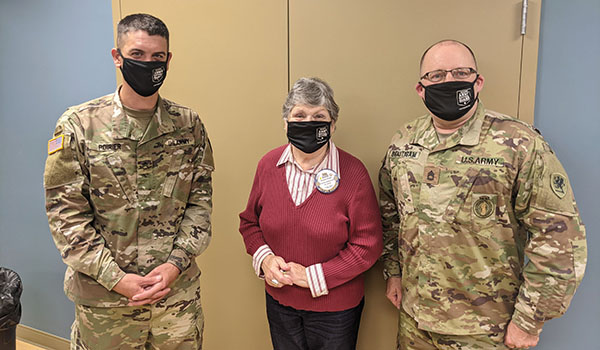 DOWAGIAC — Members of the Army National Guard paid the Dowagiac Rotary Club a visit on Thursday.

The National Guard is a reserve component of the U.S. Armed Forces that can be deployed or mobilized for federal and domestic missions. The Guard responds to domestic emergencies, overseas combat missions, counterdrug efforts, reconstruction missions and more.

Composed of National Guard military members and units from each state and territory, more than 350,000 people are currently serving. Brautigan emphasized that the National Guard is a part of the U.S. Army.

“You have the active duty Army, the Army Reserve and the Army National Guard,” Bautigan said. “We are all part of the US Army. The reason why that’s the case is because we still get most of our funding from federal dollars, and that has grown over the years. We go to the same basic training together and conduct the same job training together.”

In order to join the National Guard, one must be 17 to 35 years of age, a U.S. citizen or permanent resident, a high school junior, senior or graduate, free of all felonies, physically healthy and able to pass the Armed Services Vocational Aptitude Battery test, a test used to determine qualification for enlistment in the U.S. Armed Forces.

With the exception of 10-week basic training, advanced individual training and unit activations, the service commitment is one weekend a month and two weeks every summer.

According to Brautigan, one percent of the U.S. population serves in any branch of the military.

“The number of people serving is actually shrinking,” Brautigan said. “Even though I’m a recruiter for the National Guard, I have assisted a few people trying to join other branches because I serve this country before I serve my Michigan patch.”

Money for college is one of the most common reasons people choose the National Guard, Brautigan said. Benefits include up to $14,400 in state tuition assistance, $4,000 per year in federal tuition assistance, $397 in cash per month from the Montgomery GI Bill and the Tuition Grant Program, a federal benefit used to pay tuition directly to the school.

The presentation also included information about the Dowagiac Armory. The regiment stationed there, the Charlie Company 126 Infantry, was an infantry-only regiment on its third deployment since 2007. Brautigan mentioned that the armory would soon be receiving remodeling projects.

“There have been rumors flying around that the armory is closing,” Brautigan said. “That’s just not true. You’re going to see some remodeling coming along in the near future. It’s going to look a lot better, they’re going to get that place picked up a little bit.”

Following Brautigan’s portion of the presentation, Poirier took a few minutes to talk about his unit, 74 Delta, and what it does.

“I’m part of a chemical, biological, radiological and nuclear unit,” Poirier said. “If something to do with weapons of mass destruction or any chemical stuff happened in the state of Michigan or in the United States, there is a group of 16 of us advising the state and our higher office on how to clean up the chemicals and how to make it safe again.”

Rotarians voiced their appreciation for the National Guard following the conclusion of the presentation.

“We’re lucky to have a unit here in Dowagiac,” said Rotarian Dick Judd. “I think it’s just under-appreciated, it’s a gem in our community. People don’t understand that there are dignified jobs and opportunities out there for educated people who wanna get going and it’s hard to get that across in schools.”

DOWAGIAC — Wednesday, the staff at Honor Credit Union’s Dowagiac branch were thinking pink, as the business donated to an... read more