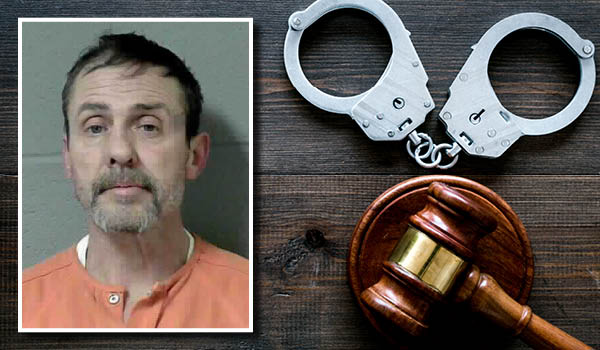 CASSOPOLIS – A Dowagiac man is going to prison after being sentenced in Cass County Circuit Court in connection with three domestic violence cases over the last year and a half.

Mark Allen Gourley, 55, of Orchard Street in Dowagiac, pleaded guilty to three counts of third offense domestic violence and was sentenced to three concurrent prison terms. He received two terms of 29 months to five years in prison and one term of 23 months to five years. He has credit for 187 days already served and must pay $2,944 in fines and costs.

Assistant Prosecutor DeVante McCullom noted that the second two incidents occurred while Gourley was on bond from the first incident.

“He’s a strong fighter and when he combines alcohol and violence, I’m concerned about what could happen next,” he said.

Defense attorney Greg Feldman said that while Gourley has owned a Dowagiac gym in the past and taught self-defense to youth, he is “not a professional trained” fighter.

“He’s simply a person who can’t use alcohol in any way, shape or form,” Feldman said. “Alcohol was involved in all these incidents. Without alcohol, he’s a well-spoken gentleman.”

“Beating on a woman doesn’t solve any problem and makes you less of a man,” he said. “Your guidelines call for prison and when I look at the horrendous things she had to experience at your hands, I don’t see anything to mitigate that.”

In another case, a Niles man is getting the chance to get his drug addiction under control in adult treatment court.

Tyler Kenneth-Duane Visel, 22, of Eighth Street in Niles, pleaded guilty to possession of methamphetamines and driving while impaired by drugs and was sentenced to three years’ probation in the Adult Treatment Court program, credit for 55 days already served and fines and costs of $2,978 in fines and costs.

The incident occurred March 20 in Dowagiac when police found him passed out behind the wheel of his vehicle and found a baggie filled with meth. The vehicle ended up being stolen out of Elkhart and he was taken to the hospital with a drug overdose.

Defense attorney Robert Kardatzke noted that this is the first time Visel has had the chance to get treatment for his addiction.

“This is the first time he’s going through real programming,” he said. “He has learned how to swallow his pride and he hopes to get his life turned around.”

Visel thanked the court for the opportunity to be assessed and get treatment. He said he plans to start college in January, and in the meantime, he is going to counseling and learning coping and other skills to deal with his addiction.

“You’re only 22 years old but this is your fifth felony conviction,” Judge Herman said. “You’ve been using drugs nearly half of your life. You’ve received an assessment in the adult treatment court and you’re doing pretty well with that. I advise you to look at your guidelines which call for prison. If you don’t take this seriously, I could send you to prison if you violate.”

Visel’s past record includes convictions going back to 2015 for larceny, unlawful use of a motor vehicle, larceny in a building, fleeing and eluding police and delivery/manufacture of marijuana.

In other sentencings, a Dowagiac man was resentenced for his role in a tri-county marijuana growing operation.

Robert Alton Casper, 56, of County Road 690 in Dowagiac, was originally sentenced to three years in prison last October on one count of conducting a criminal enterprise. Judge Herman granted Casper’s motion to set aside his original plea in September and ordered he be resentenced.

Casper was arrested with others in September 2018. His role in the operation was to rehab and maintain the properties where the marijuana plants were grown in Cass, Berrien and Newaygo Counties.

The judge agreed with Kardatzke on issues related to Casper’s prior record and proportionality. Kardatzke noted that others involved in the operation including the ringleader received shorter sentences.

Judge Herman told Casper to take advantage of the opportunity and get treatment for his addiction. He noted that Casper’s sentencing guidelines still call for a minimum six years in prison.

Heather Rocha, 34, of M-62 in Edwardsburg, pleaded guilty to use of methamphetamines and was sentenced to one-year probation, credit for two days served and $1,475 in fines and costs.

“You admitted that you used meth,” the judge said. “Do you honestly believe that anything good would come out of that? If you do it again, things will only get worse.”