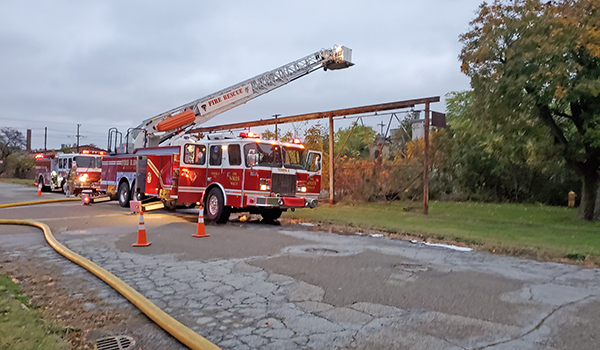 NILES — A blighted property that has been seen as a nuisance to many Niles residents caught fire early Wednesday morning.

The Niles Fire Department was dispatched to the former National Standard building at Eighth and Wayne streets early Wednesday morning on reports of a commercial fire. When units arrived on the scene, they were met with heavy flames coming from the roof and one side of the building. By 8:10 a.m., the fire had been contained, according to Fire Chief Donald Wise.

Wise said fighting the fire was dangerous as the building is condemned, with holes in the flooring and other structural problems posing hazards to firefighters.

“We went to a strictly defensive attack right away to knock the fire down,” Wise said. “By that time, the sun’s come out, the smoke cleared out, and we were able to get crews inside to do a final mop to get the last remaining hot spots. We have to treat this building with tender loving care that we don’t get our people hurt.”

At this time, the fire’s cause is unknown, but electrical and gas-related causes have been ruled out, as neither are connected to the building.

According to Director of Public Safety Jim Millin, several fires have taken place at the facility in the past, some caused by campers or squatters.

“It’s very likely, somebody, whether intentionally or unintentionally, started the fire,” Millin said.

As of 8:30 a.m., firefighters had not found evidence that any individuals were inside the building at the time of the fire. An inspection to determine the fire’s cause will take place, Wise said.

The building at Eighth and Wayne streets, owned by National Standard holding company Heico, has long been a blighted property. In recent years, residents have advocated for its demolition, and a Facebook group titled “Hey Heico! Clean up your mess in Niles!” has more than 300 members dedicated to the effort.

“We need the company to tear it down because it is unsafe for our guys to come here attack a fire like this,” Wise said. “Once this building gets going, it’s going to burn for a couple of days. It’s old, heavy timber. That’s a lot of fuel right there. It is not safe for our guys to go inside that building.”

Wise said the fire department would continue to check the structure throughout today and tomorrow to ensure no other hotspots could reignite the fire.

SOUTHWEST MICHIGAN — Three Berrien County residents have been added to the death toll of COVID-19, the Michigan Department of... read more