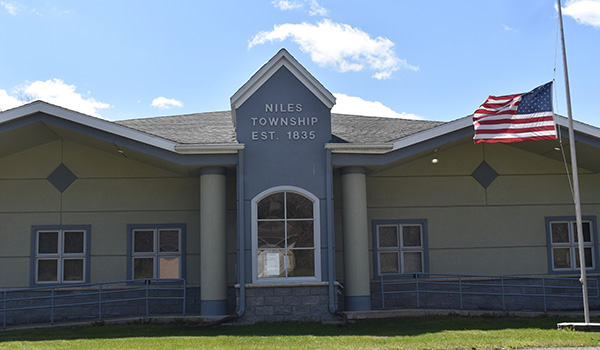 NILES TOWNSHIP — The Niles Charter Township board voted unanimously, with Trustee Dan Pulaski absent, on Monday evening to increase the sewer rates to its customers by about $3 a month.

The vote came after being informed by the city of Niles that sewer rates were increasing by 9.9 percent effective Oct.1. Also Monday, the township board worked on clarifying the fire department millage on the ballot for Nov. 3, and discussed the increased use of the Southwest Michigan Community Ambulance Services wheelchair transport van, due to lasting COVID-19 complications.

After a vote at Niles City Council on Aug. 24, the Niles Charter Township board was informed by the city of Niles that the sewage treatment rates would be increasing. For the township’s residents on a bi-monthly billing cycle, they will notice the change on their next bill.

“We [the Niles Charter Township] are the city’s largest customer,” said Clerk Terry Eull. “That raises our bill by over $100,000 a year. We can’t keep absorbing increases like that. Unfortunately, we have to pass these increases over just to break even.”

Trustee Herschel Hoese expressed concern about how the money would be used by the city, as the increase was explained to keep pace with the rate increase, by Ringler.

Trustee Chris Vella said the sewage infrastructure was old, as she has gotten notifications from the city about sewer main maintenance and breaks.

“We will probably be at the very, very low end [cost-wise] in Berrien County,” said Niles Charter Township Treasurer Jim Ringler of the increase. “It’s necessary to keep even. We just have to keep even.”

Ringler said the city of Niles has a rate study done annually to justify its rate increases.

Later in the meeting, Ringler wanted to clarify the fire millage on the ballot for the election.

“I think one of the confusing parts is that if you vote this new millage in, it replaces the special assessment district millage,” Ringler said.

“If you vote ‘yes’ on this new millage, it’s in lieu of the special assessment district,” Ringler said. “We are [looking to] replace it with a new millage that has to be voted in every six years.”

Ringler also explained that the new millage to fund the fire department that is on the ballot may be levied up to four mills.

“It’s not our intention to even levy four mills,” Ringler said. “I don’t think we will need four mills right off the bat. There may be times that we do, but it’s all one millage, and that includes equipment [cost].”

Trustee Chris Vella spoke about SMCAS at the meeting as well. She said SMCAS had received just under $75,000 of Coronavirus Aid, Relief and Economic Security Act funding.

“We did get a new wheelchair van, as transports have skyrocketed,” Vella said. “The reason for that is for the COVID-19 patients. We are saving lives.”

“[SMCAS] said they are saving lives from COVID-19, but the kidney dialysis, and ancillary effect of saving their lives, but they were on ventilators, and that it has affected [the patients’] kidneys, hearts and lungs,” Vella said. “So, they’re not considered in the death category, but they’re not really ‘well’ either. There are so many transports now to dialysis because of this. I was blown away.”